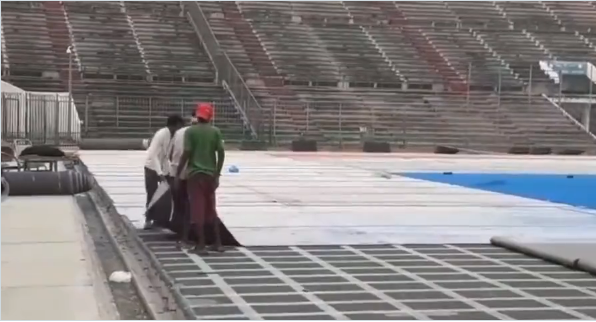 The artificial turf of Lahore’s National Hockey Stadium has been removed in order to make room for a PTI rally on August 13 called “Haqeeqi Azadi jalsa” and announced by PTI Chairperson Imran Khan,

In the midst of other rally preparations, labourers could be seen removing the astroturf, which is one of the nation’s relatively few well-maintained hockey fields.

Turf being removed from Lahore's hockey ground and ironically, it's for PTI Chairman Imran Khan's August 13 jalsa — a sportsman doing this to the country's sports.

PTI received strong and massive reproval as the move added to the party’s measures that rendered thousands of sportspersons jobless during its tenure in the Centre with the closure of departmental sports. The removal of turf would further harm the already deprived national game and Pakistani hockey players.

He said that the PHF has nothing to do with the ground which comes under the control of PSB and the Federation has to seek permission to hold sports activities there.

The PTI planned to hold its jalsa at Parade Ground Islamabad on August 13 but fearing chaos in the federal capital, it was shifted to Lahore. Instead of holding it at Minar-i-Pakistan or some other venue of the provincial metropolis, the party chose a sports venue, the National Hockey Stadium, where the turf was being removed under directions from the Chief Minister Pervez Elahi-led government.

Meanwhile, Punjab Sports Minister Taimur Masood said that the astroturf removed from Lahore’s stadium will be installed at the hockey stadium of Sargodha and a tender for the new turf for the National Hockey Stadium will be given soon.