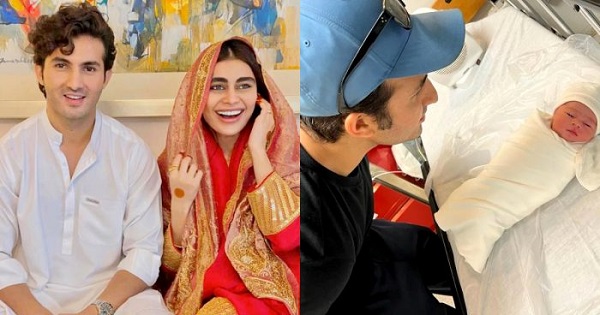 The celebrity duo who welcomed their first child, a baby girl on Tuesday. They have named their daughter, Zahra, which was confirmed by the new mom herself.

It happened so when the ‘Apni Apni Love Story’ actor reposted the Instagram wishes shared by the showbiz fraternity, which had the name of her daughter ‘Syeda Zahra Sabzwari’ mentioned in it.

Additionally, several videos circulating across social media also glimpsed the grandparents and Sadaf with the child, while Sabzwari distributing sweets to guests.

It is pertinent to mention that supermodel Mehreen Syed first broke the joyous news of the birth on her Instagram handle with a picture of the newborn baby girl and wrote, “Mashallah Allah ki rehmat

Sadaf Kanwal and Shehroz Sabzwari tied the knot on May 31, 2020, in an intimate nikah ceremony. Following the latter’s separation from his ex-wife. Sadaf. Sadaf kanwal is now a new mum at the age 28.