Gods of stone  I

For months, I have been hoping to write an op-ed where I am not slamming the west, the west that I am beholden to for igniting my intellect. Finally, desire fulfilled! My return to the homeland this time was not the happy one it normally is. I have an uncle, my mamu, who had been terribly sick through the summer and I was bracing myself for the worst. He is my spiritual and intellectual mentor, an incredibly independent person, so his illnesses rendering him weak and reliant on others were a shock. I became involved in his medical care once here and started to be informed about his various ailments, their treatments and his providers. A month in, the family decided to get a round of second opinions. The idea seemed, if not alien, uncommon, to his doctors. Still, we persisted, tiptoeing around them so as not to upset their sensibilities. After much time spent around hesitating requests, we checked him into a hospital for the day.

Luckily, I have not spent much time in hospitals or had much interaction with medicine in general in Pakistan, for which I am deeply grateful to God. The first step was to have an appointment with a general physician whose opinion we sought to explain to us what all the other doctors were saying. A bird’s eye view so to speak, as well as to understand the process of admitting someone solely for the purpose of obtaining second opinions through him. After a half an hour wait, we entered his room, which was small with a desk, his chair, two chairs on the other side facing him and a bed where presumably a patient would lie down. Once we were all seated, the doctor picked up one of the files we had brought. I signalled to my aunt to tell him why we were there. A demure, graceful woman in her 70s, she softly started to speak when he said tersely in Urdu, “Wait, let me see this first.” Then he pulled out a pen and began making a list of what looked like mamu’s medication.

It was a terrible start. Why he would not give the attendees — which is what we are apparently — a minute to speak and first describe verbally why they were there before he started on his homework was confounding. We all sat silently while he continued scribbling. He asked one or two questions about dosage or timing, and then said with an air of authority, “Now tell me.” While my aunt was describing the situation, suddenly the door flung open. A woman in her 60s, dressed to the hilt, full on makeup, appeared. The doctor stood to attention as if she was his mother-in-law, one that he was terrified of. While he bowed his head and stared at the floor, she said with a full smile, “Hello doctor sahib” completely oblivious to us, the other three people in the room, who were now staring at her in amazement. “Today I have come for myself,” she continued as if it were a treat, “so I will just be outside your door waiting.” The doctor mumbled something about giving him a minute when she said with a flick of her hand, “Oh yes, yes! Please take your time.” With that permission she slammed the door shut.

The shock on my face from the intrusion must have been obvious because the haughty doctor sat down with a sheepish look on his face. He then warned us that getting a second opinion with or without the treating doctor’s blessing would be problematic as “we do not want the doctors to get into a fight” and so we should coordinate everything through the first hospital. Rs 2,500 short and back to square one. Finally, permission was granted and the day chosen for the hospital stay. It is pertinent to mention that the hospital is probably one of the best in the city with the latest and greatest in technology and facilities.

We arrived at the location at 11 am. The first appointment was between noon and two pm. The second between six and nine pm, or so we were told. In the ER, a women who was going to initiate the process, head-covered, seemed to be reading something on her lap intently. I waited for a minute or two then leaned over to see what it was, expecting a medical journal. It seemed like verses printed on a thin pamphlet. Finally, she looked up. After that the admission was relatively smooth. Once settled in, the first doctor appeared at three pm, which was not bad. The physician we had met on the previous occasion with the crazy aunty came with him. They ordered dialysis for my mamu at their location, which meant we would have to stay overnight.

As the physician was leaving I asked him for a moment outside the room and told my aunt to join us. Her sister had died a few days earlier. The dua (prayer) for her was the next day. We had planned to be home after the appointment ended. That plan had now been changed with the stay extended by a day. I spoke to him softly with immense deference, more than I am usually capable of for someone whose arrogance was at par with the pharaoh’s and explained the situation. Could we possibly get an idea of what time the doctor’s visits would be the next day so as to be able to attend the dua? Stone-faced, as if I had told him we were potentially missing a ride at an amusement park, he said: “I do not have the ability to tell you magically what other people’s schedules are. I can only tell you mine and I do not know for sure if it will be that time either.” Brusquely, he turned around and walked away. No, “I am sorry to hear about your loss” or any expression of acknowledgement that my aunt had lost a blood relative. I was stunned but, by then, being stunned was clearly the state to get used to being in. 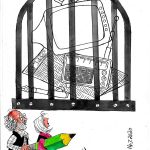