* Imran says taking money from foreign companies was not illegal in 2012
* If money raised by expats is illegal, then what about remittances and money sent for quakes and floods? 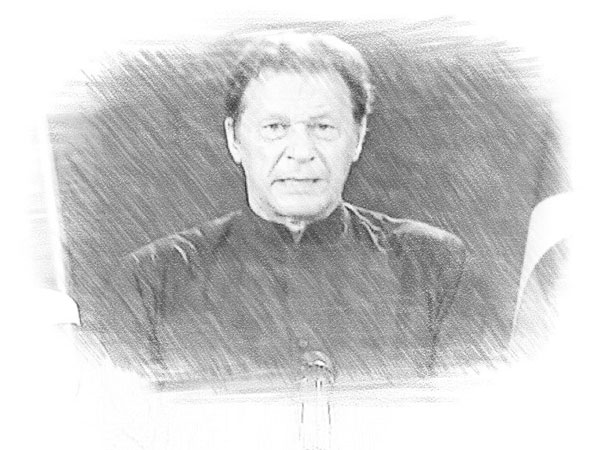 PTI Chairman Imran Khan Thursday explained the meaning of foreign funding, stating that according to the verdict of the Election Commission of Pakistan (ECP), donations collected from overseas Pakistanis were considered foreign funding.

Addressing his party workers present at the F9 Park through a live video link, Imran said that no law prohibits political parties from collecting money from overseas Pakistanis. “The PTI collected money from companies in 2012 and the law prohibiting this action was formulated in 2017; therefore, no law has been violated,” he said, adding that this was not a case of foreign funding.

Khan had called a “peaceful protest” outside the ECP Headquarters following the electoral body’s verdict related to the party’s prohibited funding case.

The party chairman had first asked the supporters to stage a “peaceful protest” against CEC Raja outside the ECP headquarters; however, after warnings from the coalition government barring them from entering the Red Zone, the venue was changed to F9 Park.

“Islamabad has been made a fortress, why are they doing this?” he said, adding that the federal capital was closed at once.

The former prime minister said that it is a constitutional right of everybody to protest, and “we [PTI] has always tried to protest with the constitution and the law.” Regarding PTI’s rule, Khan said that when the party came into power, it was given a terrible economy and then the Covid-19 pandemic happened. “Our government managed both difficult situations successfully,” he said, lamenting that despite the efforts, the PTI’s government was removed from power through a controversy.

Khan said they [coalition parties] thought that the PTI was finished because of their “conspiracy” in the wake of the no-confidence motion.

“However, they were mistaken because people took to the streets on May 25. I will never forget the massive turnout of PTI supporters,” he said, recalling that the coalition government made all efforts to stop them by inducing fear in them.

Recalling the July-17 by-polls held in 20 constituencies of Punjab, Khan said that they [coalition parties] assumed that they will rig the elections easily; however, despite all efforts to manipulate the results, they lost. Shedding light on PTI’s efforts to introduce Election Voting Machine (EVM), the PTI chairman said: “Our party has been trying for last two-and-a-half years to introduce EVMs as it can eliminate 130 out of 163 methods of rigging elections. “EVMs were stopped by two political parties and the election commission also supported them,” he added. The PTI chairman said people are selling their conscience; however, the election commission “choose to remain silent”.

“Several people with a strong background formed political parties; however, they could not function without proper funding,” he maintained. Terming the two parties ‘mafias’, he said that they had sufficient money; however, the PTI faced difficulties in collecting funds and remained a small party for several years. “I used to collect money for Shaukat Khanum Hospital and the same people said that they wanted to contribute to the party funds as well,” Khan said, adding that why don’t these two political parties fundraise. “Both political parties are doing politics on the basis of money; however, we have 40,000 donors,” he said, complaining that the ECP didn’t hear the funding cases of these two parties.

Regarding the Financial Times report, Khan said that the ECP verdict mentioned that the funds were received from Wootton Cricket Ltd, whose owner is Arif Naqvi. “We took money in 2012 and charges were levelled against us in 2018,” he said, taking a jibe at those who registered a case against PTI’s funding. The PTI chairman said that his party had received the money in 2012 from two fundraising dinners that Naqvi had organised. “The ECP is saying that that money raised by overseas Pakistanis is illegal. They are calling it foreign funding. Tell me, if this money is foreign funding, then what about the remittances and the money that is sent for earthquakes and floods?

He also refuted the claims that he had signed an affidavit, claiming that it was a certificate. Moreover, the PTI leader said that the ECP had played a “big role” in controlling elections in the country.