What’s Love Got To Do With It: Sajal Aly drops first look from movie 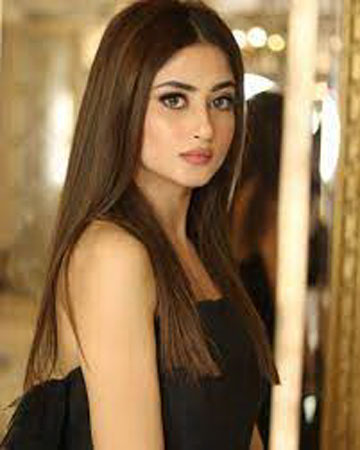 Showbiz A-lister Sajal Aly has shared the first glimpse at her character in Jemima Goldsmith’s ‘What’s Love Got To Do With It?’.

The ‘Sinf-e-Aahan’ actor took to her account on the photo and video sharing application, Thursday, and shared the first look of her character in the much-anticipated British rom-com ‘What’s Love Got To Do With It?’.

Aly who was ‘thrilled’ to share the first glimpse of the project with the fans, also broke the big news in the caption of the three-picture gallery. “The exciting news [is] that the Toronto International Film Festival will host its World Premiere on Saturday, 10th September.”

One of the group photos of the star cast of the title, see our very own artist in a pink-coloured traditional Shalwar Kameez, with a dupatta on her head over the braided hair.

The Instagram post by Aly had left fans excited and garnered a stellar response from her millions of followers on the social application. Along with the thousands of hearts on the clicks, several of her co-stars, fans and also family members turned to the comments sections to laud the actor on the achievement.

While the producer Goldsmith and Aly’s brother-in-law, Ali Ansari dropped heart and fire emoticons in the comments bar, the ‘Dunk’ actor Sana Javed wrote, “Looks great !!! All the best.”

Her recent co-star for a music video, famed singer Shehzad Roy was also spotted in the comments section, as he wished, “Wow … break a leg!”

Have a look at some of the pleasing comments by the actor’s fans on the application.

I’M SO SO SO PROUD OF YOU MY GURL

Sajlo you’ll surely rock this too

queen working hard in silence and her success making the noise

Sajal Aly – whose last on-screen appearance came in ‘Sinf-e-Aahan’ – will be next seen in the international title. Helmed and penned by Shekhar Kapur and Jemima respectively, the film is expected to be a ‘cross-cultural rom-com about love and marriage, set between London and South Asia’.