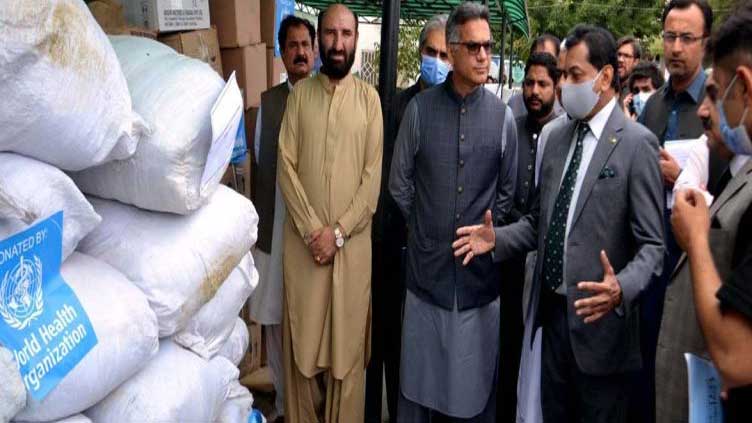 QUETTA: World Health Organisation (WHO)’s head in Pakistan, Dr. Palitha Gunarathna Mahipala handed over medicines and other equipment worth over 800 million dollars to the health department of Balochistan government for preventing cholera in rain hit areas of the province.

WHO’s Head Dr. Palitha Gunarathana Mahipala distributed donations to the flood affected areas and medicines for the cholera epidemic as well as the newly constructed Covid-19 vaccination centre at the Pak-Afghan Chaman border. Equipment, supplies and furniture were handed over to chief secretary Balochistan, on Monday.

WHO, Dr. Palitha Gunarathna Mahipala was talking to journalists on the occasion of the inauguration of an overall cholera vaccination campaign in 37 Union councils of 18 districts.

He said that by drinking clean water, washing hands with soap, and eating well-cooked food, cholera could be prevented from spreading in flood-affected areas of Balochistan saying that Cholera vaccine was being given to children for the first time in Pakistan and was inaugurated on Monday in Balochistan.

Dr. Palitha Gunarathna Mahipala visited the provincial office of Provincial Disaster Management Authority (PDMA) during his visit to Quetta and got information about the arrangements for flood and cholera outbreak.

He lauded the efforts of the Government of Balochistan, especially the health department for the measures taken in the recent epidemics and flood situation to take timely and effective actions in the affected areas and to save precious human lives. He also assured the continuation of all possible cooperation from the WHO.

Dr. Palitha Gunarathna Mahipala said that the efforts of the Health Secretary, DG Health and their team to control the cholera epidemic in Balochistan are valuable which is being formally inaugurated from Baluchistan and the cholera vaccine campaign is being started in 8 districts.

He said that more than 800 million dollars worth of medicines, tents and other equipment are being handed over to the Health Department of the Balochistan government by WHO today, which would help prevent epidemics.

Talking to the journalists on this occasion, Chief Secretary Balochistan Abdul Aziz Uqaili thanked the WHO on behalf of the Balochistan government for its timely support at all levels.

Along with the recent assistance, he explained some extraordinary cooperation, including technical support during the Covid-19 outbreak and vaccination, full cooperation during the cholera outbreak in Dera Bugti, Quetta, Khuzdar, Zhob, Harnai and Mastung, oral cholera vaccination (OCV) prioritising Balochistan for the campaign.

He said that measures were being taken to enhance capacity of relevant departments in order to ensure provision of relief to affectees people in rain and flood hit area including rural areas and Pak- Afghan Chaman border (Dosti Gate) through establishment of corona vaccination center, medical equipment for health centres in border districts bearing the burden of refugees, supply of equipment, furniture, medicines, renovation, provision of solarization, construction of model health RHC in Khanozai and Mizai Adda.

He said steps was taking for supply of motorbikes for TB program for all districts, provincial TB program, monitoring vehicle for Qila Abdullah district, provision of ambulance for ten (10) districts, provision of medicines for medical camp for forest fire victims in Shirani district, investigation and management of dengue outbreak in Kech (Turbat), various sectors to enhance the capacity of human resources in health care.

Provincial Secretary Health Saleh Muhammad Nasir also thanked the WHO for their technical assistance to the Health Department of Pakistan and upgrading the Public Health Lab (PHL) and BMCH Lab for epidemiological and natural diseases.

He also requested support for setting up an Emergency Preparedness and Response Centre (EPRC) unit in the Provincial Health Directorate for disasters and setting up effective monitoring mechanisms.