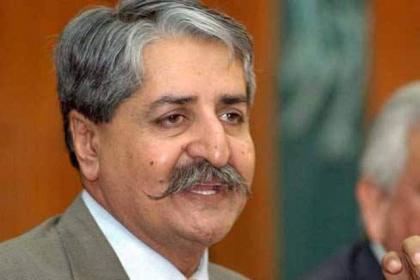 ISLAMABAD: Federal Minister for Commerce Syed Naveed Qamar on Thursday stressed the need to develop Shanghai Cooperation Organisation (SCO) Development Bank and SCO Development Fund besides developing a draft roadmap on the gradual increase of the share of national currencies in reciprocal payments by the interested member states.

While talking to SCO Secretary General, Zhang Ming here at his office, the commerce minister also showed keen interest in the joint promotion of entrepreneurial initiatives in the field of micro, small and medium-sized businesses and inter-regional cooperation.

The secretary general expressed his views on a broad range of international and regional development issues and discussed trade, economic, cultural and humanitarian cooperation in the SCO space.

He discussed the Organisation’s successful development as an effective mechanism of equal partnership based on the Shanghai spirit and also that SCO has taken a befitting place in the system of international organisations of multilateral cooperation.

The commerce minister endorsed the importance of the SCO’s initiatives on promoting interaction in the development of a new type of international relations in the spirit of mutual respect, justice, equality and mutually beneficial cooperation. He also regarded the SCO’s substantial contribution to regional security, global economic development, social, cultural and scientific ties in the region.

The minister expressed the hope that the SCO member states would continue developing cooperation in the fields of politics and security, trade, economy, finance investment, as well as cultural and humanitarian ties towards a peaceful, safe, prosperous and ecologically friendly region.

While emphasising on cooperation, the commerce minister stated that the global economy was dealing with the negative consequences of the coronavirus pandemic, as well as increased protectionism, such as unilateral trade restrictions, which are hindering sustainable and balanced economic growth.

It is Pakistan’s current priority to do management of financial and economic risks rooted in socioeconomic factors along with climate change, depletion of resources and environmental degradation.

During the meeting, the importance of effectively using the potentials of the multilateral trade and economic cooperation created during the process of the SCO’s activities was also discussed. The cooperation priorities should be the expansion and deepening of ties in the fields of finance, trade, investment, industry, transport, energy, agriculture, digital economy and other spheres, including the drafting of joint programmes and projects in the interests of the sustainable socioeconomic development of the SCO member states. It has also been reaffirmed that SCO must consider the initiatives to develop and adopt an economic development strategy for the SCO region.

Moreover, the commerce minister appreciated the initiatives of SCO like financial institutions and development institutions under SCO Interbank Consortium (SCO IBC) which are aimed at containing the growing challenges and restoring the stability of the global economy through effective implementation.

They would not only promote the development of an open global economy based on the principles of multilateralism, mutual consultation and mutual benefit, but would also help in  maintaining a smooth and stable operation of sustainable and diversified industrial supply chains.