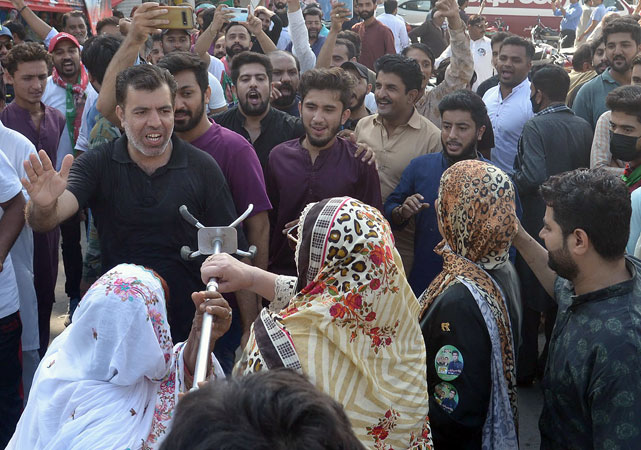 The by-elections on 20 Punjab Assembly seats Sunday witnessed scattered incidents of exchange of fisticuffs and tiffs in Lahore. There were also claims of vote-buying.

In Lahore, a fight reportedly broke out between political workers outside a polling station in the PP-158 constituency. Following this, the ECP issued directives to the district returning officer (DRO) to inspect the location and receive a briefing from security officials.

PML-N and PTI workers clashed outside polling station no. 126 of Jhang’s PP-125. The polling station was set up at Kashmir Colony Government High School. Workers of both the parties used sticks to attack each other.

A PML-N worker was injured in a scuffle during the by-election in Lahore’s PP-158. The injured, who was identified as Shakeel, alleged that he was tortured on the order of PTI leader Jamshed Iqbal.

Scuffle broke out between the supports of the three parties outside polling station 51 of PP-168. Police had to resort to baton charge to disperse the workers. Polling was also stopped briefly due to the fight.

The Election Commission had established 3,131 polling stations in the constituencies of which 676 had been declared “highly sensitive” while 1,194 declared “sensitive”. A special monitoring cell had also been established at the Ministry of Interior in Islamabad to ensure law and order.

Meanwhile, Rangers, Pakistan Army and Frontier Constabulary personnel were deployed in Punjab. Punjab police had also set up a control room and finalised their preparations to ensure peaceful holding of by-elections. Women police were deployed at the polling stations reserved for women.