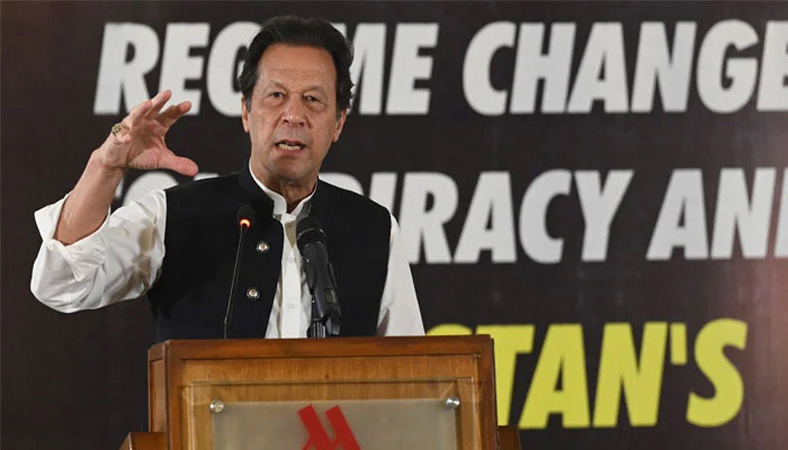 PTI Chairman Imran Khan Saturday challenged the amendments made in the National Accountability Ordinance, 1999 by the government in the Supreme Court. The former prime minister filed a petition in the top court under Article 184 (3) of the Constitution.

In his petition, the PTI chairman said that the amendment has taken away the authority of appointing a NAB chairman and has given the responsibility to the current government which will “maneuver by the bulk of the holders of public office to assume control over and influence the impartiality of the NAB chairman.” Moreover, it states that the bill will “virtually eliminate any white-collar crime committed by a public office holder”.

Khan requested the Supreme Court to “adjudicate upon questions of great public importance with reference to the enforcement of fundamental rights of citizens under articles 9, 14, 19A, 24, and 25 of the Constitution. The former PM argued that the amendments made in NAO, 1999 were “person specific and as such, it is just and fair to protect the constitutional and fundamental rights of the citizens of Pakistan.”

It further stated, “The NAB may be asked to provide details of all such cases which relate to the prominent and influential holders of public office, especially regarding cases pertaining to offences of owning assets (movable and immovable) without means.” Last month, the government passed the National Accountability (Amendment) Bill, 2022, in the National Assembly and the Senate. The NAB bill has formulated a post-retirement procedure for its chairman, among other changes. However, President Arif Alvi returned the bill unsigned even after its approval from both the houses.

Later, on June 9, the government passed the law in the joint sitting of the parliament, however, it was rejected by President Alvi due to the “flaws in its implementation”. But the amendments were turned into law as the bill was passed by a joint sitting and if the president does not give his assent then the bill is turned into law within 10 days.