Analysis of dissertation on Mumtaz Raashid

* In 2015, a female researcher Talat Riaz wrote a research dissertation on the life and works of Mumtaz Raashid for Minhaj University 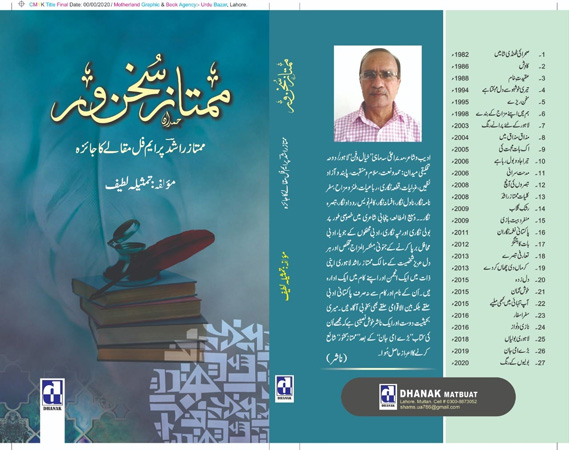 It is a great tribute paid to an artist in his/her life time when research is conducted on his/her works and the researcher is rewarded in the shape of M Phil degree.

Mumtaz Raashid is one such guy on whose works, research was conducted and the student who did research was Talat Riaz, and presenter of the book under review is Tamseela Lateef. Mumtaz Rashid is an engineer by profession and a poet by passion. His passion started getting shape in the form of poetry 45 years ago. He is a versatile artist as he is publishing a quarterly literary journal namely ‘Kheyal-o-Fun’ from Lahore and Doha simultaneously. His personal traits are saying poetry in all formats, novel writing and short story writing, travelogues, column writer, analyst etc. In Punjabi language he specializes in the domains of Bolian and Tappa.

In 2015, a female researcher Talat Riaz wrote a research dissertation on the life and works of Mumtaz Raashid for Minhaj University. This thesis was then published in a book form of 212 pages. This book comprises six chapters followed by summary and conclusions. The first chapter comprises Mumtaz Raashid Lahori’s life and works. Mind you that Mumtaz Rashid added the word Lahori after his name when he returned to Lahore after spending a lifetime in Doha.

BIRTH — even when abroad Mumtaz Rashid has played the roles of a faithful husband, a loving son, a caring father to his kids and a brother to his siblings, amicably well. He was born in Mozang area in Lahore on November 25, 1953 to Mian Muhammad Shafi. He was brought up in his maternal grandfather’s house as his father died when Mumtaz was a child. After getting training and getting diplomas from Pak German Training Centre in Mechanical Technology and Government College of Technology in Civil Technology he found a job in Doha, Qatar through his maternal cousin Khalil Siddique. He continued perusing his education in Doha and graduated from Allama Iqbal Open University through Pakistani Embassy. During his service in Qatar, he completed four years course in Arabic and retired from Electrical Department ‘Kehrma’ in 2014 after serving for 36 years in its drawing and survey section. It was now time to return home. It was but natural that his poetic works exhibit the culture of Doha Qatar also. He collected the poetry he read in various literary functions and the first book on Urdu literature in Ghazal format titled ‘Kawish’ was published in Doha in 1986. This publication enhanced and established his credentials as a well-respected poet. In parallel he had continued his interest in prose also and his book titled ‘Sehera Ki Thandi Shamain’ (cool evenings of the desert) was well received in 1982, four years before his poetry book Kawish. He continued his struggle to collect poets and writers in Doha in the form of literacy forums and formed a literary society namely ‘Bazm-e-Urdu Qatar’. He also started the publication of a literary quarterly magazine ‘Kheyal-o–Fun’. It still continues and so does Bazm-e-Urdu Qatar. Upon return Mumtaz spends his time among literary people and participates in the literary functions in Lahore. His book titled ‘Ruke Hue Aansoo’ is based on his poetry after he returned from Doha. This reviewer had concluded in his book review, ‘The book is a voluminous book comprising poetry in nearly all formats. His Ghazals ‘Udasi, Besukooni, Sham-e-Hijran, Phailte Saaye’ depicts the despondency in love and ‘Teri Guftagoo Main Jamal Hei, Teri Khamshi Bhi Kamal Hei’ exposes the poet’s nearness to amorousness in a relationship. Dozens of such Ghazals can be quoted. His diversity of selections of themes for his poems can be judged from his Punjabi poem ‘Eidhi Baba’ on Page 160. A separate section has been devoted to his Punjabi poetry. He has said lot many ‘Qata’at’ on different topics. He has said ‘Rubai’ also. Worth mentioning is his Rubai on the poet late Saeed Qais who spent all his life in Bahrain. Mumtaz’s approach in saying poetry is based on classic poetry. His contemporaries Ali Asghar Abbas, Islam Azmi and Shafiq Ahmad Khan agree with this observation’. Chapters 2 to 6 in the book under review discusses Mumtaz Raashid’s Hamd-o-Naats and Nazms (poems), Ghazal Nigari, Qata’at and humour, collection of poetry and finally critical appraisal of Mumtaz’s style respectively. Professor Dr Mumtaz Husain, a well-known name in Urdu literature who lived his life in Doha, Qatar had observed that a poet’s sticking to his own style in saying poetry makes his poetry closer to reality. Mumtaz used to worry a lot about his family in Pakistan when he lived in Doha for earning his bread and butter, had in this frame of mind translated his thoughts in the poetry such as, ‘Abhi Kutch Aur Sehni Hei Mujhe Pardes Ki Wehshat/Abhi Bache Bhi Chote Hain, Makaan Bhi Namukamal Hei’ (I have to face the dilemma of staying abroad more as my kids are still small and my house is not complete also). This simple poetic expresses poet’s helplessness as he has to stay and endure more separation abroad. Despite trying his luck in many domains of poetry, it seems that Mumtaz is basically a poet of Ghazal saying. This observation becomes evident when one reads his Kuliyaat (collection) one realizes that life speaks and sings through his Ghazals. The bitter realities of life are dressed with delicacy and beautiful cover impressing the readers through the creative treatment. Mumtaz says ‘Tanqeed Kar Rahe Hain Tau Itna Rahe Kheyal/ Is Main Chupi Hui Koi Tazleel Bhi Na Ho’ (If you criticize, take care that you do not end up degrading the poet) – Page 112. Apart from romance, Mumtaz touches the bitter realities of life such as inflation, lack of jobs, scattered socio-economic problems and cultural fiasco etc. He says ‘Is Main Tera Hi Tazkira Aaye Ga/Tafseel-e-Raigaani-e-Umr Na Pooch’ (your name shall come up again and again if you ask the details of a life lost’ – Page 116). Raashid has covered both aspects of life ‘Gham-e-Doraan’ and ‘Ghum-e-Janaan’ as both themes need strong emotions to pacify one’s mental satisfaction. Mumtaz is equally strong in Nazm Saying. He says ‘Ik Zamane Sei Poori Duniya Main/Fakhta Aur Shaakh-e-Zetoon Amn Ka Hei Nishaan/Iss Alaamat Ko Chuna Hei Jis Nei/Mujh Ko Us Sei Koi Shikwa Tau Nahi Hei Laikin/Gar Mere Zimme Yehi Kaam Lagaya Jaata/Main Alaamat Kei Bataur/Nau Shagufta Sei Kisi Bache Ki Tasveer Wahan Sei Daita’ (Since long dove is symbol of peace. I have no problem with the ones who made this decision but if I was given the task I would have given the picture of a fresh child) – Page 134. Mumtaz has 27 books to his credit. Research conducted by Talat Riaz and compiled by Tamseela Lateef in the form of this book needs appreciation.