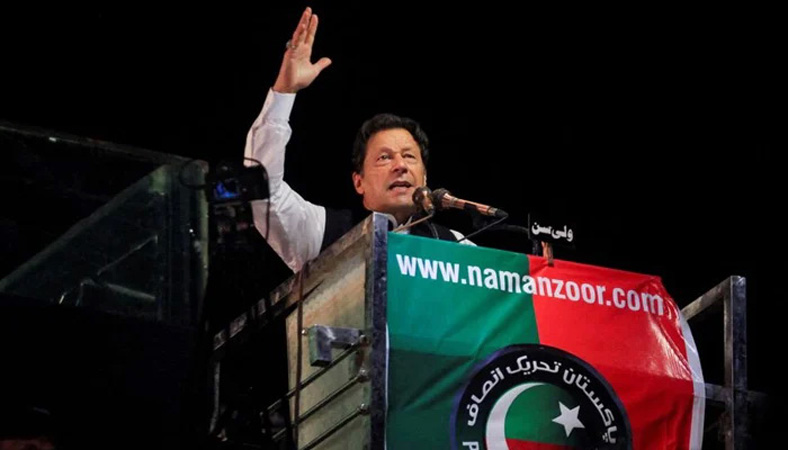 Former prime minister Imran Khan Saturday said that the ‘powerful quarters’ are disturbed due to the ongoing political and economic crisis, a private TV channel reported.

In conversation with journalists and anchorpersons on Saturday, the PTI chairman said the only way to ensure the ongoing crisis is resolved is for the government to hold elections.

The ousted prime minister said he had two options after his ouster in April – seek forgiveness from “powerful quarters” or fight his case in public. “I decided to go to the people,” Khan told journalists and anchorpersons, referring to his “Azadi March” and the protests that followed after his removal from power.

In the coming days, Khan said he would march to Islamabad and rebutted speculations that the “Azadi March” had come to an end. “No one should think that the march has ended.” The PTI chairman said he would hold a long march with “full force” after Supreme Court’s orders as the party had knowledge of all matters and is prepared to face what was ahead of it.

“We have decided to fully confront the government’s fascist tactics,” the PTI chairman said, adding that after the budget for the next fiscal year, it seems that this government will remain in power for only a month and a half. Khan added that the International Monetary Fund (IMF) would never accept the coalition government’s budget and that global institutions were aware of the current set-up’s “incompetency”. The ousted prime minister said IMF and other countries are aware that the public does not support the current government. A day earlier, PTI Chairman and former prime minister Imran Khan had rejected the budget for the new fiscal year, terming it “anti-people” and “anti-business”. The budget is based on “unrealistic assumptions” on inflation and economic growth, he said. In the budget, the government has set the targets for inflation and economic growth at 11.5 per cent and 5pc, respectively.