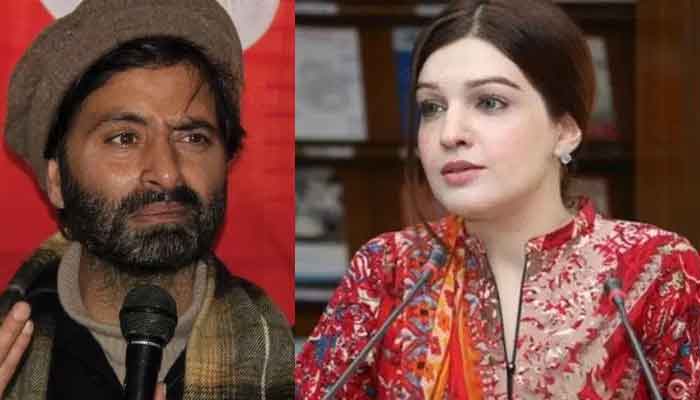 ISLAMABAD: Mushaal Hussein Mullick, wife of jailed Kashmiri Hurriyat Leader Yasin Malik Thursday condemned shifting of Yasin Malik to an isolated cell in notorious New Delhi’s Tihar jail, which she said an attempt to push him to the jaws of death.

Mushaal while talking to media persons along with Speaker National Assembly Raja Pervaiz Arshaf expressed apprehension that her husband could be silently killed because notorious Narendra Modi government scared of Kashmir leader even in jail.

The hurriyat leader said that Yasin’s activities were being monitored through close circuit cameras in isolated cell, who had been awarded life sentence by an Indian kangaroo court in a sham trial. Mushaal lamented that occupation authorities were using all brutal tactics to silence the voice of Chairman Jammu and Kashmir Liberation Front after their failure to buy his consciousness.

She said that the symbol of resistance was caged in a small isolated cell just to make him psychological patient. Mushaal said that level of brutalities of Indian fascist authorities could be judged from the fact that his mother and sister had been denied access to him in jail.

The hurriyat leader stated that despite repeated request neither she nor her 10 year-old daughter were allowed to see him for the last 8 years. She appealed to the international community, human right organizations and OIC to take cognizance of the victimization of Yasin by the Indian government to ensure protection of his life as his life was in danger.

She also asked Speaker National assembly to raise voice for release of her husband Yasin Malik at international fora including written a letter to speakers of assemblies of different countries.