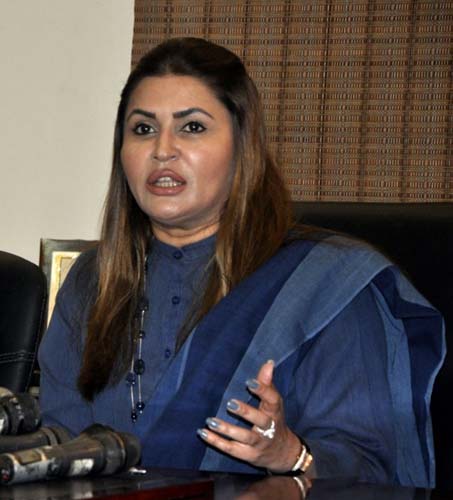 ISLAMABAD: Federal Minister for Poverty Alleviation and Social Safety, Shazia Marri Thursday criticized the recent statements of the former Prime Minister, Imran Khan, and said his mental condition had become a threat for the country.

“Imran Khan has lost his senses after losing power and challenging the existence of the country and targeting the institutions”, Shazia Marri said during a presser along with the Pakistan People’s Party (PPP) leaders, Faisal Karim Kundi and Nadeem Afzal Chan. “Imran Khan is saying that if he will be in the power, the country and its institutions would exist however if he would not be in power, nothing would exist which is highly condemnable”, Shazia Marri said.

Shazia Marri said that PPP was a party which raised the slogan of “Pakistan Khappey” at the time when Shaheed Mohtarma Benazir Bhutto was martyred and country was facing the situation of anarchy and chaos. “PPP has rendered great sacrifices but continued its struggle for strengthening the democratic norms in the country while the former Prime Minister is challenging the existence of Pakistan and talking of dividing the country only for the sake of losing power which reflects his unpatriotic thinking”, she said.

About the recently announced relief package of Rs 28 billion to avert the affects of petroleum price increase on the poor, Shazia Marri said the increase in petroleum price was although a difficult decision to take but inevitable for saving the country’s ailing economy due to the ineffective policies of the previous government. “There was no option for the current government except increasing the prices of petroleum products when the country was facing with economic crisis, unemployment and increased poverty ratio ever inherited from the previous government”, she said.

The relief package has been announced to provide relief to the poor people from the petroleum prices increase inducted inflation. The eight million existing beneficiaries of Benazir Income Support program (BISP) Kafaalat will be eligible to get additional Rs 2000 along with their quarterly assistance while six million more beneficiaries would be identified through the BISP National Socio Economic Registry (NSER) after sending their CNIC to a number which would be announced shortly, she said.

The present government is aware of how increase in the price of daily used commodities has reduced the purchasing capacity of the common people. “We reminded the previous government again and again about the impacts of inflation on the poor but they created difficulties for the people in the name of Ehsaas”, she said.

“Why we called Imran Khan `selected’ as none of his policies was pro-people and he is unable to tell the people in its speeches about his government’s performance of the last four years”, she said.

Shazia Marri said that the former PM had no answer to the corruption scandals like Peshawar BRT, Malamjabba, Rawalpindi Ring Road, Petroleum sector, Medicine, Gogi etc in which his government was involved. Imran Khan was threatening those institutions which were taking decisions as per the constitutional requirements instead of appreciating, she said.