Nisar says Daesh has no presence in Pakistan

ISLAMABAD – Minister for Interior Affairs Chaudhry Nisar Ali Khan on Saturday stated that the Islamic State (IS) militant group, also known as Daesh, has no presence in Pakistan.

“Daesh does not exist in Pakistan. Other terrorist groups, which are involved in activities against the state are using Daesh’s name and are causing death and destruction in the country,” the minister said.

He said the Islamic State does not maintain the same level of presence in Pakistan as it does in other North African and Middle Eastern countries. Earlier this week, Intelligence Bureau (IB) Director General Aftab Sultan informed the Senate Standing Committee on Interior that the militant group was emerging as a threat in the country because several militant groups had soft corner for it.

The Interior Ministry has been denying the presence of the Islamic State in Pakistan, saying that it was an Arab organisation. But Mr Sultan said the IB had busted a big network after several members reached Punjab following Karachi’s Safoora Goth carnage in May.

Sultan elaborated that terrorists were reorganising and stressed the need for a border control mechanism, particularly with Afghanistan, enhanced regional cooperation, implementation of the National Action Plan and de-radicalisation policy with a focus on counter-narrative.

Inter-Services Public Relations (ISPR) Director General Lieutenant General Asim Bajwa had also stated in November 2015 that Pakistan has a zero tolerance for Daesh and the terrorist group has no acceptance in the country.

He had elaborated that the Pakistani society has totally rejected Daesh and there was no acceptance of the terror group in Pakistan. He had also stated that action is expected against any visibility of Daesh in Pakistan. 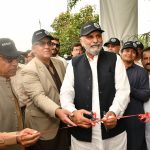