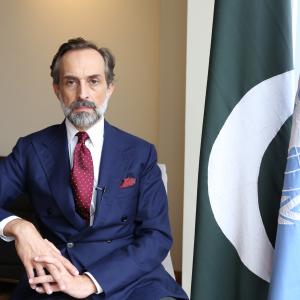 Speaking on this occasion, Julian Harneis appreciated the Punjab government’s vision of providing social services as durable steps that would empower women while ensuring gender equality in the society. Both would jointly counter climate changes which were a collective challenge for the whole world, he added.

On the occasion, Hamza Shahbaz appreciated UN partnership for human resource development and welcomed UN bodies’ cooperation for social development in the country. He maintained that a balanced plan of action would have to be formulated to ensure durable human development which was the need of the hour.

He said that out of box solutions would have to be adapted to deal with water shortage and other issues, adding that the drought like situation in Cholistan and other areas could endanger humans and wildlife. “The Punjab government’s steps to overcome water shortage in the expanse of Cholistan have started yielding positive results while climate challenges have become a global threat”, he added.

The chief minister said that Daanish schools were the best source of providing quality education to children of backward areas. Similarly, the Pakistan Muslim League-Nawaz (PML-N)-led government had adopted numerous praiseworthy steps to protect women and helped them to join the development process in its previous tenure.

He said that use of quality seeds was being encouraged for better productivity in south Punjab and the targets of clean energy would be achieved through collaboration.

He said that urban foresting, water reserves and zero plastic waste targets had been pinpointed and the Provincial Water Act was being introduced to improve the recharge of groundwater in cities. “Joint steps would also be taken to protect and improve cultural heritage”, the CM added.