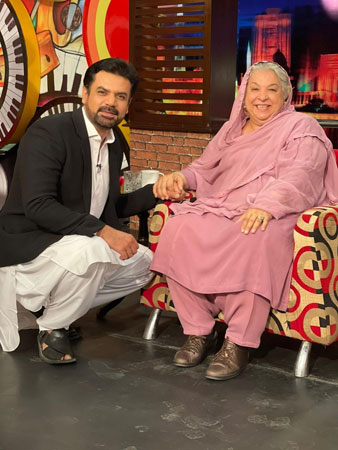 Pakistani actor Vasay Chaudhry has praised Pakistan Tehreek-e-Insaf (PTI) leader for her courage and determination during the clashes between PTI workers and police amid the PTI long march, Dr Yasmin Rashid was stopped by law enforcement personnel who attacked her vehicle and attempted to detain her.

Taking to Twitter, Vasay said, “The Lioness of Lahore, No matter which party you are from but two days back the kind of determination, resolve, courage and commitment she showed was insane and today she took our little quips with equal grace, laughter and smiles. Thank You madam.”

Yasmin Rashid on Wednesday said that she was injured after police attacked her car and broke windscreen and windowpanes.

Talking exclusively with Dunya News, the PTI leader said that they were on roads since 9am and police since then fired hundreds of tear gas shells on her convoy.

She further said that she does not expect anything good from the incumbent government but it is her duty to try to reach Islamabad despite these hurdles and blockades.

In a message to her party workers, the former Punjab minister asked them to march towards federal capital.

The PTI leader was arrested by the police and was released later. After she got released, the “iron lady” came back to the roads in a bid to follow PTI chairman Imran Khan s call for a long march and protests in the country.