* Furthermore, he emphasises that we have colonised the future 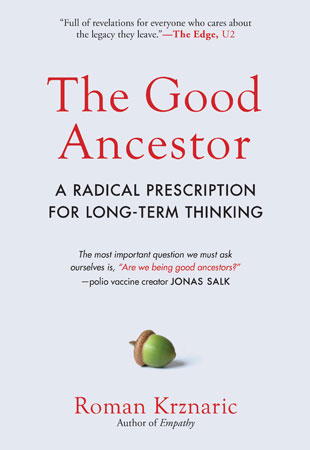 “In an incredibly short period of time we have endangered a world that took billions of years to evolve. We are just a tiny link in the great chain of living organisms, so who are we to put it all in jeopardy with our ecological blindness and deadly technologies? Don’t we have an obligation, a responsibility, to our planetary future and the generations of humans and other species to come?” Roman Krznaric, a pop philosopher in the Alain de Botton mold, particularly writes this predicament in his book, The Good Ancestor.

This book is an amazing read. Krznaric in this book raises a profound question: “Are we being good ancestors?” We are the inheritors of gifts from the past; We received an immense legacy from our ancestors. Are we able to pass them on to our descendants? As he is an expert in finding practical solutions to deep-rooted problems. He believes that just as we received so many riches from the past, we must also pass them on to our descendants. He was convinced that to do so we need a radical shift in our temporal perspective towards one far more focused on long-term thinking.

Furthermore, he emphasises that we have colonised the future. The future is seen as nobody’s land. Similarly, Roman …. Notes that We are treating the future so flagrantly that we are even creating ecological, technological risks for our ancestors.

Furthermore, it contends that the intergenerational justice in political life cannot be earned until there is a crisis that threatens those who dominate the system and undermine their power and authority, which could be anything from a war to a financial crash. What here Roman Krznaric wants to say is that all global problems are posed by elite, privileged and powerful people. but, unfortunately at the time of crisis they insulate themselves from others. As Karl Marx claimed that “Those who have only seen the cold heat from the window and read hungry in the books, they cannot lead the ordinary people”. Marx was right

The tragedy is that we are doing pleasurably all this with the unborn generations of tomorrow who are granted no political rights and representative. They are powerless. All these are being unfolded because of short-termism which is a prevailing power in today’s world. For him, we are incumbent to act and stage movements for future holder’s rights. To achieve all these objectives; he provides six ways to think in long term.

Besides that, Krznaric, convincingly, argues that our brains are wired for both short and long-term thinking. Firstly “marshmallow brain” can be fixed on short-term desires and rewards. Secondly, humans also possess an “acorn brain,” which helps us to work towards long-term goals and envision a distant future. For him at this time of dire need that humans are facing a global crisis to encounter it, we must prefer “acorn brain “rather than Marshmallow. In a similar vein, he sheds light on the various forms of long-term thinking, such as cathedral thinking, holistic forecasting, and transcendent goal that help us to envision future challenges.

Kznaric argues that representative democracy, with its short-term election cycle and policies, is ill-suited to confront the long-term problems. But here he doesn’t mean an authoritarian form of government would be able to fix these lifelong challenges. He emphasises establishing new roles, bodies, and institutions in democratic structures. Such as adopting a strategy by the government to create guardians of the future. It works for the well-being of future holders.

Every book has its pros and cons. This book also has some strengths and weaknesses.

Firstly, the strongest aspect of this book is that it offers an understanding of how we are influenced by short-termism from the personal to political, from private lives to cotton on public life. He further explains that the dangers of short-termism brought us to a crisis point in which humanity is confronting a global problem that is badly damaging our ecological environment. There are growing concerns that this short-sightedness will lead humanity to catastrophic consequences. But there is a hope that the human mind is also capable of Long-term thinking. We should extend our time horizons to encompass decades, centuries, and millennia by doing this not only we can be able to overcome the global crisis but also serve future generations in a better way.

The second positive point in this book I found very fascinating is that it suggests an antidote for political myopia. This idea focuses to create a new political model that Krznaric calls “deep democracy”. It aims to extend the time horizon of democratic government that fails to take long views. The ruling political class typically neglects future generations in their decision-making; they even refuse to see the future as their responsibility. So too the way of my thinking the idea of “deep democracy” would be very helpful to tackle the present political short-termism by embedding long-term thinking within democratic institutions.

Roman Krznaric writes that “We are so busy living in the present, caught in the short now of work deadlines and instant messaging, that the idea of being just one link in a vast chain of humanity that stretches through cosmological time might feel hard to grasp.” It means humans are now victim of short/termism we are busy doing things which might result in catastrophic consequences.

But for Roman there is still a hope if we want to become good ancestors we need to take steps towards building a prosperous society for today’s generations and the unborn generations of tomorrow. So how does this idea take practical shape? As rightly claimed by Jonas Salk, that “Our greatest responsibility is to be good ancestors.” Until we cannot take this responsibility on our shoulders and manage things for future generations, it’s not possible to provide a prosperous future. Similarly, Francois Hollande, president of France, contends that “we have a single to protect and hand on the planet to the next generation. He is right.

Every writer makes efforts to fully attract his/her readers. Moreover, to do so the writer offers arguments, and narratives based on logic and reason, but as human beings sometimes we become very subjective in our arguments. The same happened with Krznaric. He overemphasized his narratives. He describes today’s man as self-centred and egocentric but the reality is different. We have inherited a massive legacy from our ancestors but one cannot deny the fact that we have also contributed too much to the well-being of future generations. For instance, when we go through the past then we will be able to see that thousands of people died because of common diseases, famine and wars, but today’s man had scored a major success in overcoming all these issues. As there is a famous saying by Yuval Noah Harari l, “Most humans never enjoyed greater peace or prosperity than they did under the aegis of the liberal order of the early 21st century. For the first time in history, infectious diseases kill fewer people than old age, famine kills fewer people than obesity and violence kills fewer people than accidents.

Roman Krznaric writes that “We are the inheritors of gifts from the past. Consider the immense legacy left by our ancestors”. Here Roman Krznaric points out that our ancestors who built the pyramids by outstanding engineering work and those who sowed the first seeds in Mesopotamia 10,000 years ago, who cleared the land, built the waterways and founded the cities. But here he completely ignores the other side of it that how common people suffered from this. There is famous phrase by Walter Benjamin that “Every monument of civilization is a monument of barbarism”.

We never know what the future holds for us. Nevertheless, being humans, we invariably had this edge of deep prognosis. We can deeply analyse the present by taking stock of the present. But again, as we appreciate our forebears for what they bequeathed to us, we hope, our progenies will appreciate how we struggled for their future.

In a nutshell, The Good Ancestor is a brilliant book. It is a source of inspiration. It teaches us how can we be good ancestors. Additionally, it stresses what kind of challenges humanity will face in the future, and how we will be able to tackle these challenges in current social and political scenarios.

The writer is a student at Quaid-e-Azam University, based in Islamabad