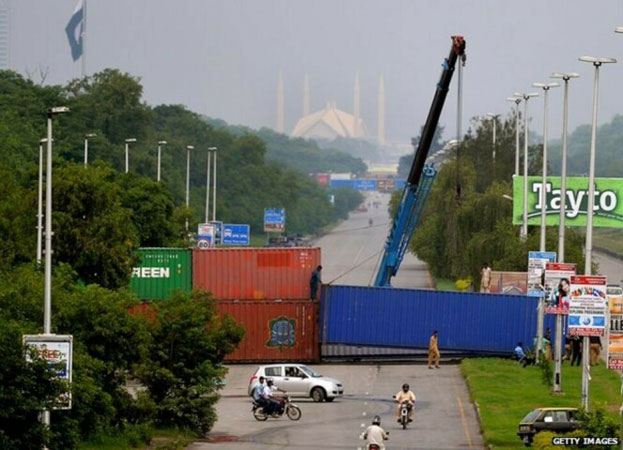 The PMLN-led federal and Punjab governments have closed several roads leading to Islamabad from various Punjab cities and Khyber Pakhtunkhwa (KP) province in an effort to stop PTI activists from marching on Islamabad. The government has cut road links between KP and Punjab as police parties continue to raid the homes of PTI activists. The authorities have also imposed Section 144 in Sindh, Punjab, and Islamabad Capital Territory, banning the assembly of more than four people. The authorities have cut major road links between Punjab and KP, the PTI home province where the party is still in power. They blocked the Grand Trunk (GT) Road by placing shipping containers over the Attock Khurd Bridge which marks the border between Punjab and KP. They also closed the motorway M1 connecting the two provinces. Meanwhile, other motorways traversing Punjab, including M2, have been blocked at several places. Most extensive road blockades were seen in the Punjab capital of Lahore where the government placed shipping containers over the Ravi Bridge. A heavy contingent of police was deployed there. The blockade caused a massive traffic jam as the old Ravi Bridge has already been closed for heavy traffic.

In Rawalpindi, the government has sealed all the bus terminals, effetively shutting down inter-city public transport. The most import Pirwadhai and Soan bus terminals were sealed first. The authorities have told transporters not to ply their vehicles for the next few days. In Islamabad, the authorities started sealing the red zone soon after Imran Khan spoke on Sunday. The government would be deploying over 22,000 security personnel near the sit-in including 4,000 from Pakistan Rangers and 8,000 from Punjab Constabulary. At least 2,000 anti-riot police officers and another 2,000 Sindh police personnel have also been called in to assist Punjab police.

The authorities have closed the motorway with shipping containers at Kamalpur Interchange in Faisalabad, one of the major Punjab cities. Reports said PTI activists were planning to leave for Islamabad via motorway. A heavy contingent of Punjab police has been deployed near the motorway to prevent activists from breaking through barricades. The authorities in Punjab’s Bhakkar have closed the road link with KP’s Dera Ismail Khan by placing shipping containers on the Darya Khan bridge. Local administration in Bhakkar had closed the roads using shipping containers. Images show local traffic stopped at a road blocked by a trailer truck. Meanwhile, Sindh and Punjab governments and the Islamabad capital territory administration have imposed Section 144. Under Section 144, the display of arms and the assembly of more than five people is banned. Along with this, a ban has also been placed on the tools that could possibly be used for aggression as well as provocative speeches.