FM Bilawal defends Imran Khan’s visit to Russia in US 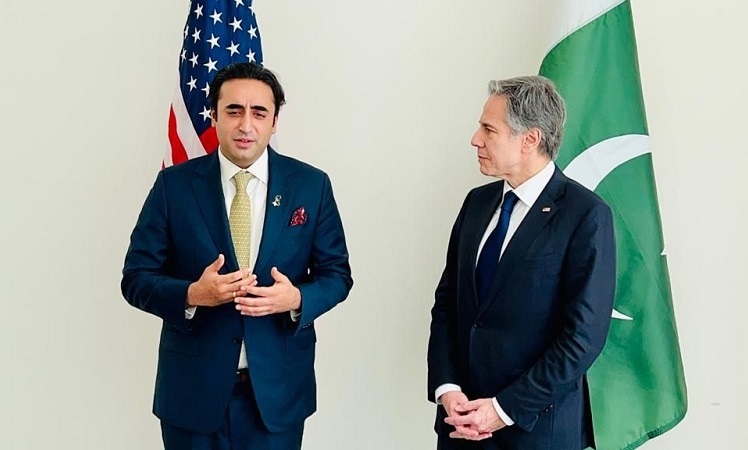 Imran Khan, who used to be prime minister, keeps saying that his removal was caused by the US government. Imran Khan says that the US voted him out through a “no-trust” motion because he went to Russia during the conflict between Russia and Ukraine and promised to make his own foreign policy.

During a press conference in New York, Bilawal Bhutto was asked about former PM Imran Khan’s trip to Russia. In response, he said, “As far as the former PM’s trip to Russia goes, I would defend him 100 percent.” He also said, “The Pakistani PM did that trip as part of his foreign policy.”

Bilawal Bhutto said that no one knew a war between Russia and Ukraine would happen.

“I think it’s very unfair to punish Pakistan for something that was done in good faith. “Of course, Pakistan is very clear about the United Nations’ principles of non-use of force, and we stand by these principles,” he said.

The FM went on to say that Pakistan is not involved in any conflict and never wants to be. “He said, “We will keep stressing how important peace, dialogue, and diplomacy are to ending this conflict as soon as possible.”

“We will not support any aggressor in this situation,” Bilawal said, adding that Pakistan has its own problems and has seen a decade of wars in Afghanistan.

Bilawal said that Pakistan is tired of this war because its children, leaders, men, and women have all been killed. “So, we think that using dialogue and diplomacy can help us solve many problems.”

Later, when talking to the media in New York, FM Bilawal slammed former Prime Minister Imran Khan for his “undemocratic and unconstitutional politics.”

Bilawal said, “Imran Khan does not do democratic, parliamentary, or constitutional politics. Instead, he is moving toward extremist politics.” He said that the Opposition has the right to protest, but that Imran Khan is making up lies about political opponents and institutions.

Bilawal Bhutto went on to say that Imran Khan would have nowhere to hide if they told everyone how his government was formed and how it was run.

“Therefore, Imran Khan should act as a responsible member of the Opposition, or else he will have to answer,” Bilawal said. He also said that those who helped bring Imran Khan to power will also have to answer.

We should give PM Shehbaz a chance: Bilawal

Bilawal Bhutto said that Prime Minister Shehbaz Sharif should be given a chance to fix the country’s problems. He did this to show his support for the government.

“We need to find solutions to problems by working with all parties and stakeholders,” he said.