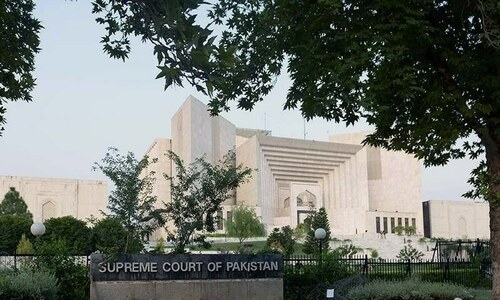 ISLAMABAD: The Supreme Court (SC) on Thursday directed the government not to transfer investigation officers (IOs) in the high profile cases being pursued by the Federal Investigation Agency (FIA) and the National Accountability Bureau (NAB).

The court issued notices to the secretary interior, FIA director general, NAB chairman/ regional directors, prosecutor generals, and advocates generals in the provinces and the Islamabad Capital Territory (ICT) and the heads of prosecution branches of the  FIA and the NAB.

The said officers were directed to file their statements in writing, answering to the extent relevant to them, the allegations, the facts and the material that are contained in the order of 18.05.2022 and the opinion of the learned recommending judge for commencement of the proceedings.

According to the notices, “the points that are involved for response and explanation by the said officers are:

(i. The names of such officers and their successors in the Investigating Branch and the Prosecution Branch of FIA and NAB in high profile cases who have been transferred, posted, removed from their positions in the last six weeks.

(ii The names of persons who have been removed from the ECL (Exit Control List) during the said period and the process employed in distinguishing their cases for the relief granted. The description of the process now adopted for dealing with the ECL affectees and whether the previous process has been amended or abandoned as a result. Status quo shall be maintained till the next hearing.

(iii The steps taken for the preservation of the case files and the case record with the Investigating Branch, the Prosecution Branch and the record of the trial court concerned , whether the Special Court (Central) or an accountability court.

(iv The investigation and prosecution record in respect of high-profile cases pending with both the FIA and the NAB shall, unless required for submission in court, be checked, verified and kept in safe custody of the head of the department concerned and a report stating compliance to the said effect shall be presented to the court on the next date of hearing.

(v No prosecution case shall be withdrawn until the next date of hearing.

Notices were also issued to the registrars of the high courts of the provinces and ICT for conveying the order to the courts of Special Judge (Central) and accountability courts functioning within the jurisdiction of the respective high courts.

The SC noted that it was concerned with the guarantees provided by the Constitution to the people of Pakistan in Article 4 for the rule of law, Article 10 for compliance with due process and Article 25 of the Constitution for equal protection of and equal treatment of all persons in accordance with law. “These guarantees serve to assure the  integrity, sanctity and fairness of the criminal justice system; and to secure that alone is the object of these proceedings.”

The apex court ordered that transfers, postings and removals of persons involved in the investigation of or prosecution of high-profile cases falling within charge and jurisdiction of the courts of Special Judge (Central) and the accountability courts would not be removed, transferred or posted till further orders.

During the course of proceedings, Attorney General for Pakistan (AGP) Ashtar Ausaf sought leave to file documents that to his mind would be of assistance in the matter of securing, promoting and ensuring the integrity, sanctity and the fairness of the criminal justice system in the investigation, prosecution and trial of high-profile cases before the above-mentioned courts.

The CJP asked the AGP whether he had read the paper book. The AGP responded in affirmative and said an honourable judge of the apex court had mentioned interference in the paper book.

The chief justice said the death of FIA’s Dr Rizwan due to a sudden heart attack was mentioned in the paper book. Different newspapers’ cuttings were also part of the paper book. According to reports, the officers investigating Prime Minister Shahbaz Sharif had been replaced, he added.

He said a competent officer like the FIA director general was removed. He asked why officers were transferred in the high profile cases. The court had to ensure transparent and independent work of the prosecution branch, he added.

He said FIA’s former director Mohammad Rizwan, who was probing the money laundering charges against PM Shehbaz Sharif and his son Punjab Chief Minister Hamza Shahbaz, was also transferred and later died of a heart attack.

He said the court was concerned over the developments. According to news reports, thousands of people had benefited after their names were removed from the no-fly list, he added.

The chief justice said the court was seeing such news reports for the past one month and it had an effect on the rule of law. It was the court’s responsibility to maintain peace and trust in the society under the Constitution, he added.

The CJP said the suo moto notice was not meant to embarrass or hold anyone responsible. “It is meant to protect the criminal justice system and the rule of law,” he observed.

He said the court wanted the implementation of Article 10-A (right to fair trial), Article 4 (due process) and Article 25 (equality of citizens). The notices were being issued to the parties concerned, he said, expressing the hope that the Federal Government would cooperate in providing an explanation.

Justice Naqvi said the FIA prosecutor had filed a written application in the court stating that he was told to not appear in the money laundering case against PM Shehbaz and CM Hamza.

Justice Munib Akhtar observed that the transfers and postings were apparently targeted.

The AGP said the FIA would have a proper reason for making the changes. Upon this, Justice Munib Akhtar said the court was concerned which was why the chief justice had taken the notice.

Chief Justice Bandial said the court was only concerned with ensuring justice. It wanted to maintain the dignity, honour and respect of the investigation process and it was not doing it for point-scoring. The court would not be affected by any kind of criticism, he added.

He said, “We are answerable to Allah and the Constitution. We do not need praise and are not afraid of criticism. We only want the provision of justice which is done at the conclusion of a case.”

The chief justice observed that the social media cells of political parties were very strong and the court had been observing developments while remaining a silent spectator.

He said the accused in the cases had not been convicted yet and no one should tamper with the justice system. He said that the apex court was reviewing judicial proceedings.

He said the special courts in Karachi and Lahore lacked judges while three accountability courts in Islamabad were also empty.

The case adjourned till May 27