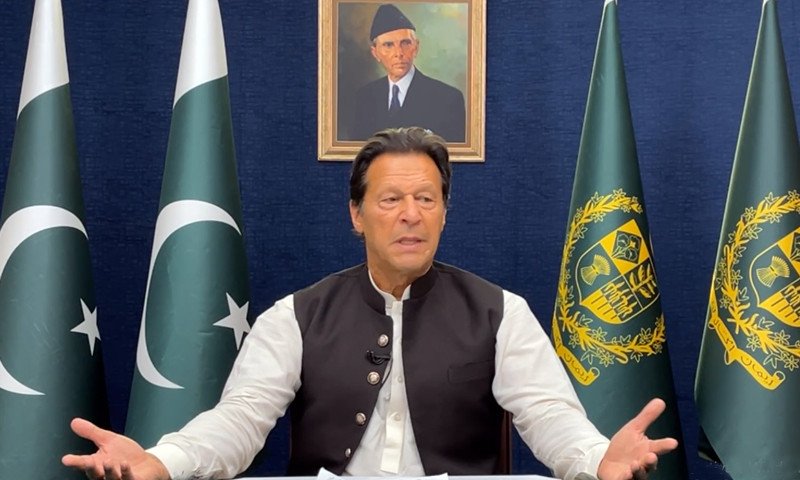 SWABI: Former prime minister Imran Khan on Monday said that he will reveal the name of the poison which was used to induce a heart attack and kill the former director of the Federal Investigation Agency (FIA) Dr Muhammad Rizwan. Addressing a jalsa in Swabi, the PTI chairman said the FIA has already been “destroyed” as the official — who was probing the alleged corruption cases against Prime Minister Shehbaz Sharif and his sons — was “killed while another officer was fighting for his life”.

Imran Khan said: “When the PPP left government, Nawaz Sharif compromised with the MQM. After an operation was launched against the MQM, the party started targeting individual police personnel because of which Sindh police is still unable to become an independent department.”

“There’s a killer placed on top of the FIA. His end will be what the MQM did to the police after the operation,” he added.

The ousted premier told a charged crowd that he wants everybody present at the Swabi jalsa to come out when he gives a call for the long march. Ever since his ouster from power, the PTI chairman has been holding a series of jalsas in different cities, including Karachi, Mianwali, Lahore, Peshawar, Sialkot, and Faisalabad, as he rallies his party workers and leaders against the government ahead of the Islamabad march.

“Those of them who cannot join me in Islamabad should come out in Swabi and fight against the imported government,” he said, reiterating that the agenda of all Pakistanis should be Ghulami Na Manzoor (No to slavery).

Recalling the time when Pakistan participated in the US war on terror, Khan said that 80,000 Pakistanis — most of whom were people from tribal areas — sacrificed their lives but nobody acknowledged their sacrifices.

“Nobody respects slaves, hence, we must admit at all costs that this imported government was imposed on the people of Pakistan through a foreign conspiracy,” he maintained.

Inviting everybody to his planned long march to the federal capital, the PTI chairman said: “We need to convey this message to the imported government and the foreign conspirators that we do not accept the regime change.”

Regarding the three bigwigs of the coalition government, he highlighted that during the 10-year period when these three stooges — Asif Ali Zardari, Nawaz Sharif, and Fazlur Rehman — were in power, 400 US drone attacks were reported in Pakistan.

He alleged that these “three stooges” did not raise their voices against the drone attacks due to which several innocent people lost their lives.

“These people would never raise their voices for the people of Pakistan because they are the slaves of the West and worship money more than anything else,” he said, alleging them of having offshore accounts.

The former premier said that they [the US] knew that Imran Khan would never let them mistreat the people of Pakistan, therefore, they have imposed this “imported government” here.

Recalling Prime Minister Shehbaz Sharif’s statement regarding “beggars can’t be choosers”, he said that the Bhutto and Sharif families have been ruling Pakistan for the last 30 years.

“It is because of the dynastic politics of Shehbaz that he says beggars can’t be choosers, while PML-N leader Khawaja Asif says that Pakistan is on a ventilator,” Khan said, adding that because of statements like these, they are forced to become slaves of the US.

“We have only one demand — early elections — as all of them have joined hands to defeat Imran Khan,” he said.

He added that in Pakistan, everybody knows who are the “turncoats”; however, the Election Commission of Pakistan (ECP) does not understand.

“The ECP is trying to protect the turncoats,” he said as he accused the commission, recalling that during his last public gathering in Faisalabad, people promised him that not a single turncoat will win the next general elections