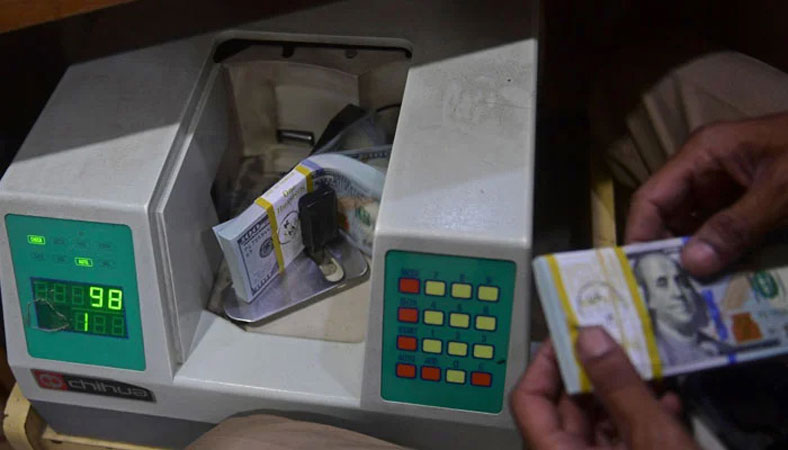 Rupee continues to lose steam, as on Friday it fell by nearly Re1 against the US dollar in the interbank market on the back of uncertainty over resumption of the IMF loan programme and shrinking foreign exchange reserves.

The rupee was trading at Rs193 during the intraday; however, at close the current settled at Rs192.53 with a loss of Rs0.76 or 0.4%. The slide of the local unit was weighed down by a surging trade deficit, dwindling foreign exchange reserves – that dropped to their lowest level since December 2019 – and a delay in the release of the IMF tranche. Talking to a local news channel, Exchange Companies Association of Pakistan (ECAP) Chairman Malik Bostan said the widening trade deficit and political uncertainty were adding pressure on the dwindling rupee.

“When the new government took charge, the rupee recovered to Rs181 from a record high-level of Rs189; however, after ousted prime minister Imran Khan announced to hold a long march, the rupee once again broke all records,” he said, says a news report.

Political unrest owing to PTI’s protest campaign against the government is eclipsing the new economic team’s focus on economic firefighting.

Former prime minister Imran Khan has announced to march with millions of his supporters towards Islamabad after May 20 to demand new elections to add to the troubles of the economically-challenged PML-N-led regime. Bostan maintained that if the political crisis prolongs, the “situation will get out of hand”.

Regarding IMF, the analyst added that talks with the Fund were very important and the government needs to take some tough decisions to revive the stalled programme.

The market is also eyeing the outcome of Prime Minister Shehbaz Sharif and top PML-N leaders’ meeting with the party supremo Nawaz Sharif in London for any clues on when the new government would withdraw energy subsidies to restart IMF loan negotiations on May 18, and whether it will agree to announce fresh elections or not.

“The State Bank of Pakistan [SBP] also needs to take action to control the free fall of the Pakistani rupee,” he said, adding that the rupee rate cannot be determined by the demand and supply regime.

He also maintained that the rupee-dollar parity would also improve if Imran Khan decided to take back his long march call. “The new government should focus on fixing the economic situation rather than being involved in political debates with the former PTI-led government,” he said.

The analyst predicted that the dollar value would move up to the 195-mark; however, its value will decline significantly later.

Taking to his Twitter, PTI chairman and former prime minister Imran Khan highlighted that the rupee was at an all-time low of Rs193 [per dollar] (from Rs178 per dollar on March 8); interest rates at 15% highest since 1998; stock market down 3,000 points or 6.4%; stock market lost Rs604 billion capitalisation; inflation 13.4% – highest since January 2020. “Reflects lowest ever confidence in imported government,” he wrote.

“The market [is] awaiting policy [and] action, which [the] imported government has failed to provide. Both myself [and] Shaukat Tareen had warned the “neutrals” that if conspiracy succeeded our fragile economic recovery would go into a tailspin. That is what has now happened,” he added.

Meanwhile, former information minister Fawad Chaudhry criticised the new government for ignoring the economic crisis. “While the so-called government leaders are sitting in London, the US dollar has surpassed 193 […] this drama should end and the government should announce elections,” he wrote.

Exchange Companies Association of Pakistan General Secretary Zafar Paracha has painted a bleak outlook in case the value of the dollar continues to increase and called for imposing an “economic emergency”.

He said the dollar had been reaching a new high every day, noting that it was being traded at approximately Rs193 in the interbank market today, for nearly Rs195 in the open market and around Rs200 in the “grey market”.

“We call [on authorities] every day on the media to manage this country but we don’t see any government,” he said and warned that a persistent increase in the value of the dollar would lead to a “storm of inflation” of “unimaginable” intensity.

Giving the example of Sri Lanka, the island nation that has been facing a severe economic crisis, he said it was “very small a trailer” and the situation in Pakistan could be worse. “There (Sri Lanka) the population is only 25 million and here, we have a population of 250m, with people having weapons in abundance.”