Over 50 sheep, goats die of thirst in Choilstan 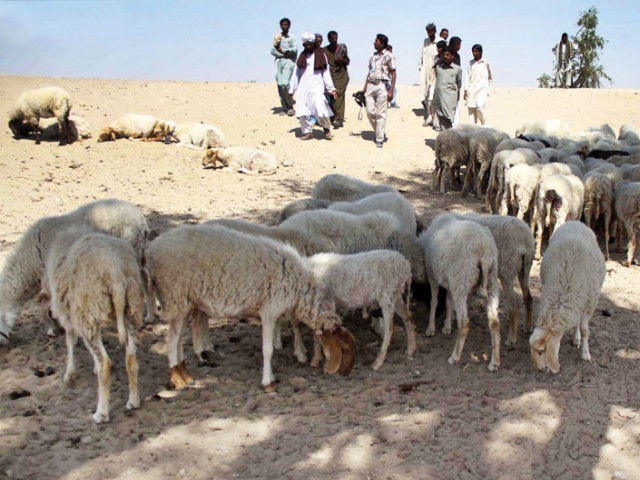 BAHAWALPUR: Over 50 sheep, goats and cows have died in Cholistan after the desert has been experiencing worst condition of drought and water scarcity as it did not receive rainfall for long time.

A number of cattle including sheep, goats, cows, and wildlife species have died in Cholistan desert area spreading to over tens of thousands of acres of land which did not receive adequate rainfall for long time. “Cholistan has human population of over 0.2 million and cattle population of over 1.2 million besides tens of thousands of wildlife species,” said Riaz Baloch, a Cholistani farmer, adding that the desert region had been experiencing worst condition of drought as adequate rains did not fall for long time.

Reports reaching here suggested that thousands of people along with their cattle have been forced to leave Cholistan and move to other areas due to non-availability of water for their families and cattle. However, the local divisional and district managements of the provincial government had started initiatives to cater water need in Cholistan desert area.

“Chief Minister Punjab, Hamza Shahbaz himself had taken notice of drought-like situation in Cholistan and directed to utilize all available resources to supply water to Cholistan,” said Commissioner Bahawalpur division, Cap. (retd) Zafar Iqbal who chaired a meeting of senior officials at his office to review water scacity situation of Cholistan.