Supernet limited first IT company enlisted on GEM board of PSX 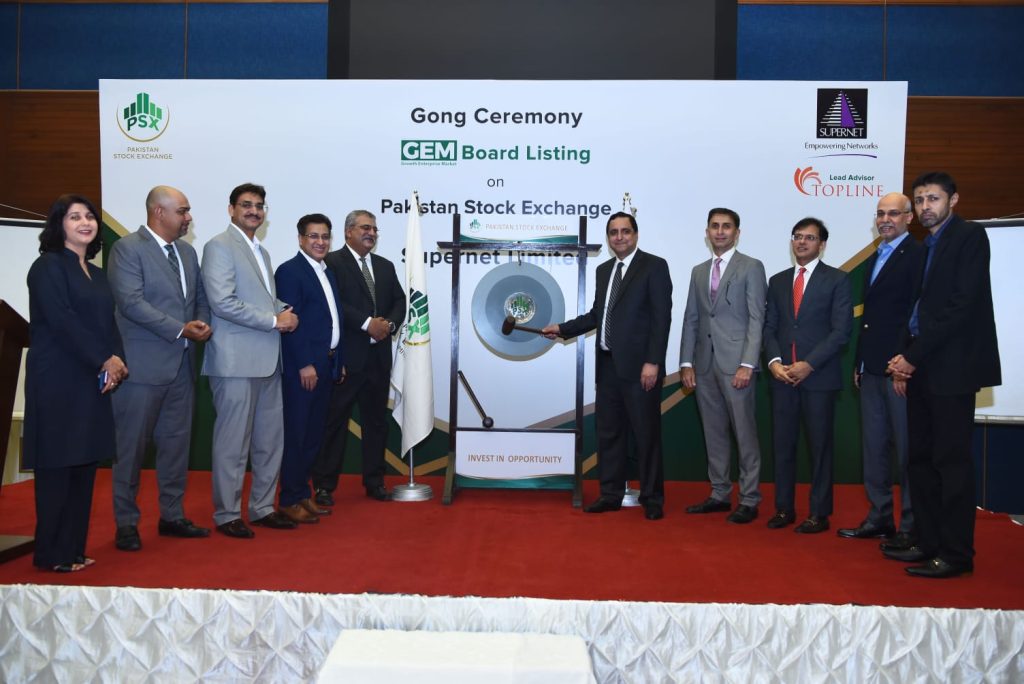 The GEM Board is a listing platform created to facilitate growth enterprises, whether small, medium or greenfield businesses, for their capital raising needs.

A Gong Ceremony was held in this regard to announce the listing of Supernet on PSX’s GEM Board. The Ceremony was attended by COO PSX, Nadir Rahman; Advisor Supernet Limited, Shams Arfeen; CEO Supernet Limited, Jamal Nasir Khan; CEO Topline Securities, Mohammed Sohail and senior management of the participating organisations.

Supernet was founded in 1995 as a Data Network Operator and Internet Service Provider. SL is a leading company offering ICT solutions nationwide, according to a press release issued on Tuesday.

It is a major provider of Connectivity Solutions and has, over the last few years, expanded into providing IT solutions, cybersecurity solutions and services, infrastructure solutions and services, and call centre services suite and business process automation. Supernet is a subsidiary of Telecard Limited, a well-known telecommunications service provider in Pakistan, which is also listed on the Main Board of PSX.

Supernet issued new capital in order to fund procurement of fixed assets, invest in its subsidiaries and raise working capital. In addition, the parent company Telecard also sold shares for working capital.  The capital was raised through 100pc Book Building method. The Issue Size was a total of 21,111,121 ordinary shares. Out of the total Issue, 8,888,889 shares were offered as Offer for Sale by Telecard Limited and 12,222,232 shares were offered as fresh equity. The entire Issue was offered at a Floor Price of Rs22.50 per share. Supernet had thereby set out to raise Rs475,000,220/- at the Floor Price, of which Rs200,000,000/- were to be raised as Offer for Sale by Telecard and Rs275,000,220/- were to be raised as fresh equity.

The book building for Initial Offering of Supernet took place on 12th & 13th of April, 2022. A total demand for 28,499,292 shares was received against the Issue size of 21,111,121 shares, thereby the Offer was oversubscribed by 1.35X at the Floor Price of Rs. 22.50 per share. A total number of 106 investors took part in the Book Building, of which 88 were successful investors. The investors included high net worth individuals, insurance companies, Modarabas, and foreign institutional investor(s). Speaking at the occasion, the COO PSX, Mr. Nadir Rahman, stated, “PSX is delighted to welcome Supernet Limited as the third equity listing on the GEM Board of Pakistan Stock Exchange. As a leading company making its due mark in the ICT sector of the country, Supernet has evolved from providing basic internet services to providing IT, cyber security, and infrastructure solutions as well as call centre services suite and business process automation.”

He added, “For a company like Supernet which provides communication/ IT infrastructure solutions for Defence services of  Pakistan as well as for various Government departments, federal or provincial, it is a matter of pride for the capital market that Supernet’s book building and listing has taken place on the GEM Board of PSX. This goes to show that PSX’s GEM Board is indeed a cost efficient and appropriate platform to raise capital for SMEs and growth enterprises.

This listing along with others will go a long way in adding depth to the capital market and will further our country’s economy. The GEM Board is an innovative and progressive platform facilitating growth enterprises and SMEs whereby new and evolving solutions are incorporated on the GEM Board in line with the changing economic and regulatory landscape and in tune with the needs of the growth enterprises.”