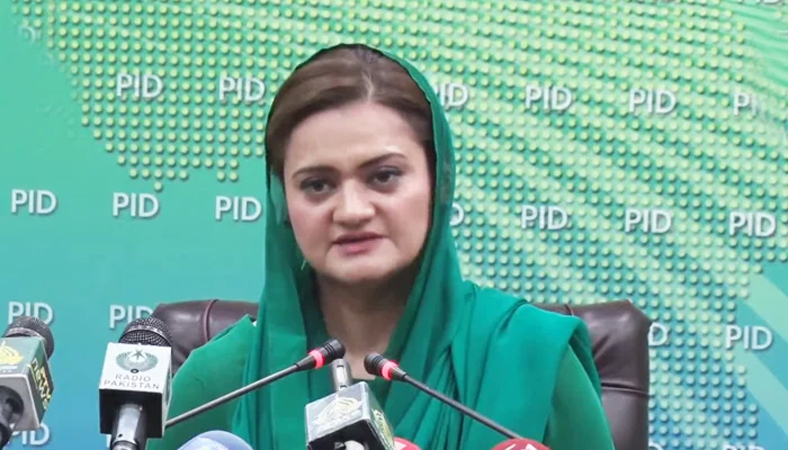 Federal Minister Information and Broadcasting Marriyum Aurangzeb has said that former Prime Minister Imran Khan did not achieve anything sublime which could have invited international powers to hatch a conspiracy to derail his government. Speaking at ‘Meet the Press’ of Lahore Press Club (LPC) here on Sunday, she said neither Imran Khan initiated atomic explosions nor did he start the CPEC or launch a project which may put countries in awe, adding why would a superpower conspire against a government which had lost confidence of the people.

“You, as prime minister, invited countries as observers at the OIC meeting in Islamabad and now allege them of conspiracy,” she said. She observed that Imran Khan was in the habit of leveling baseless allegations against political rivals, adding why did he not take action against the people to prove truthfulness of his allegations during his tenure.

Information Minister Marriyum Aurangzeb said Imran Khan had pushed country into chaos due to his vindictive nature, political victimization and poor governance, and alleged that Imran Khan compromised Kashmir cause. She further said that not foes, but Imran Khan, hatched a conspiracy against Pakistan.

Marriyum said Imran Khan, due to his incompetence and inefficiency plunged Pakistan into a storm of dearness, price-hike and inflation, adding that the masses had to face poverty due to the incompetence of the PTI government.

The minister said Imran Khan closed down metro bus project during his tenure although people could have been provided cheap transport from Faizabad to Islamabad Airport, adding that Imran Khan kept the 27 power plants closed which caused power-shortages.

She said Prime Minister Shehbaz Sharif has been voted into power through public support and power of the vote, adding that Shehbaz Sharif was not elected through the votes of the disgruntled PTI parliamentarians but the votes of the former PTI ally parties which had rejected Imran Khan’s mantra of economic failure and political victimization.

“Come out of fear of Shehbaz Sharif. He is a reality who has support of the people of Pakistan”, Marriyum said, adding that, Imran Khan sought help from financial institutions, whereas Prime Minister Shehbaz Sharif went to the friendly countries to seek assistance.

To a question, the Information Minister said the PML-N led coalition government will never indulge in blame-game against national institutions, adding that it was necessary to set the record right and “let people know of our performance”.

To another question, she said the government would never drag institutions into politics, adding that it was not PML-N Vice President Mariam Nawaz but PTI Chairman Imran Khan who made a mention of the chief of country’s intelligence agency during a public rally a few days back. She said the officers who serve political aims of certain politicians stand in stark violation of their oath of allegiance to the country and constitution.

To a question regarding corruption during Usman Buzdar era, she said all corruption will be investigated and front-persons like Farah Gogi will be brought to light.

On FIA notice to a senior journalist under PECA, the Information Minister said Prime Minister Shehbaz Sharif has taken notice of the issue, adding that the Prime Minister had already asked the FIA to withdraw its appeal against the IHC verdict in the Supreme Court.

About an allegation by PTI Chairman Imran Khan, the minister said no television channel has been placed on later numbers on the cable network, adding that the Cable Operators Association has denied any discrimination as claimed by a particular television channel. She said all channels were broadcasting Imran Khan’s speeches, adding that the government need not put a curb on his coverage as he will doom himself in the public eye through his unsubstantiated lies.