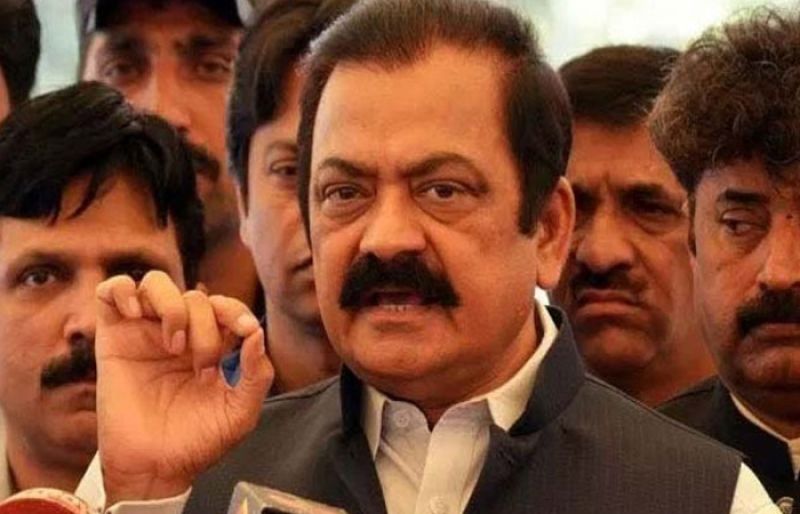 LAHORE: Interior Minister Rana Sanaullah has said if Sheikh Rashid Ahmad does not withdraw his statement of terming the long march bloody and fails to give assurance of peaceful march, then he will not be allowed to leave his house.

Talking to the media after attending a case hearing here on Saturday, he said that there was a series of allegations against Farah Gogi, a close friend of former premier Imran Khan’s wife. He said that Usman Buzdar was a dummy chief minister and he was appointed for implementation of orders through Farah Gogi. He said that Farah Gogi gathered billions of rupees through postings and transfers and so far, transactions of Rs 1 billion had been detected, which were sent abroad.

“Imran Khan launched an amnesty scheme to benefit Farah Gogi, and she benefited from it fully,” he added. He said that investigations were being conducted into allegations and cases would be registered when credible evidence would be found. If need arises, red warrants would be issued to bring back Farah Gogi, he added. The minister said that Imran Khan got registered fake cases against the then opposition leaders and took personal interest in this regard.

“It is a gesture from us that we respect courts, whereas the shameless group is claiming that the whole cabinet is on bail,” he added. While questioning fake cases, Rana Sanaullah said that a case of 15kg heroin was registered against him. He said that Shahzad Akbar contacted an Islamabad police official to register a heroin-smuggling case against him, but on his refusal, it was managed through the Anti-Narcotics Force (ANF).

Referring to Imran Khan’s murder allegations against him, he said if he had really committed such acts, then why cases were not lodged against him during the past three-and-a-half years of the Pakistan Tehreek-e-Insaf (PTI) government. He said that Imran Khan had launched a campaign to incite his workers and fans to misbehave with political leaders.

If Imran Khan did not abstain from such acts, then he would also have to face reaction, he warned. He said that Sheikh Rashid used to claim that jail was his in-laws, but now he had approached the Islamabad High Court for pre-arrest bail. He said that Sheikh Rashid used to misguide people and claimed that the long march would be a bloody one. If he did not withdraw his statement, he would not be allowed to leave his house.

He said that the religious sections were agitating over the Masjid-e-Nabvi incident. “We did not want such acts to happen and this act should be condemned and they (PTI) must distance themselves from such acts,” he added. To a question about PML-N mass contact campaign, he said that it was going to be an election year. “We have started a campaign and we will negate the PTI narrative that only they could organise big public rallies,” he added.

Earlier, the minister appeared before a special court in connection with hearing of a drug-trafficking case against him. The court issued notices to the ANF and others for May 21 on an application, filed by Rana Sanaullah for permanent exemption from personal appearance in the case due to his engagements. The court also sought arguments on acquittal applications of three co-accused in the matter.