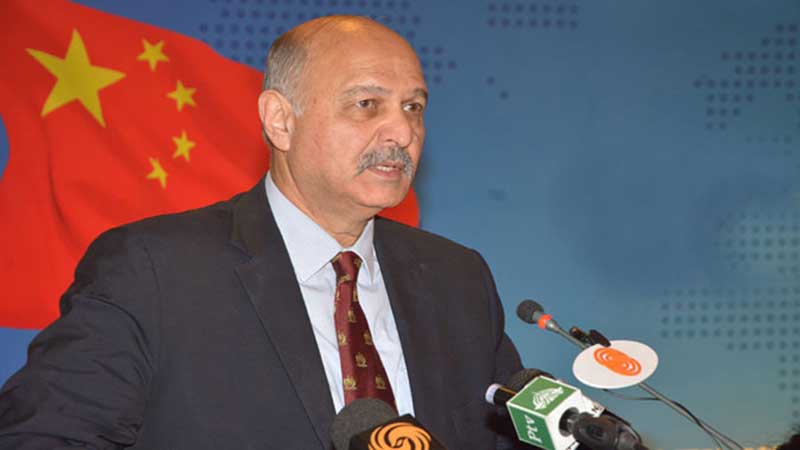 ISLAMABAD: Senator Mushahid Hussain on Friday led a delegation of Senate Defence Committee to the Chinese Embassy for expression of sorrow, solidarity, and support following the terror strike against Chinese teachers in Karachi.

The delegation was received by the Acting Ambassador, Chinese Chargé d’affaires Pang Chunxue, and her senior colleagues, said a news release. Senator Mushahid Hussain said the delegation was visiting the Embassy with a heavy heart as this was the third act of terror against the Chinese in Pakistan within a year.

And that Chinese teachers were target was quite shameful. He said all political parties in Parliament shared these sentiments as China is Pakistan’s paramount partner and strongest friend, a friendship that has widespread support from the people of Pakistan. Senator Mushahid Hussain expressed regret that ‘our security system has failed, both, to protect the Chinese working in Pakistan or to prevent recurrence of such acts of terror’.

He said ‘a comprehensive review and rethink of such a faulty system is needed’ if ‘we went CPEC to move forward successfully’. He said ‘such a breach of security is unacceptable’ for a country like Pakistan whose armed forces successfully overcame an inland war against terrorism. He said ‘we fully share in your sorrow, we fully share in your indignation and we fully share your concerns about this serious security lapse’, which, if allowed to recur, can result in drying up of foreign investment.

The delegation included Senators Mushtaq Ahmed, Faisal Javed, Anwarul Haq Kakar, and Dr Zarqa Suhrwardhy. Secretary of DefCom, Major (r) Hasnain Haider was also present. The Chinese Acting Ambassador profusely thanked the Senators for their gesture. Incidentally, this was the first visit by a Parliamentary Committee to the Chinese Embassy since the terror strike in Karachi.