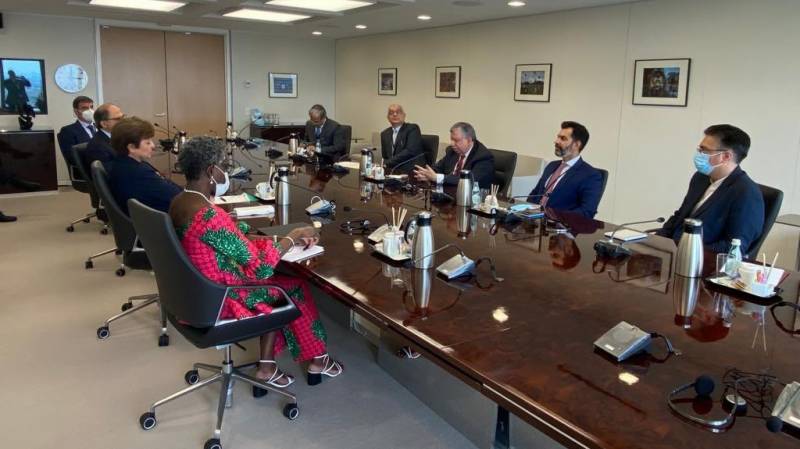 The International Monetary Fund announced that it will be sending a mission to Pakistan in May after the global lender held “several meetings” with Finance Minister Miftah Ismail and his team in Washington. The announcement of the mission’s visit to Pakistan was made in a press release issued by the Finance Division following Ismail’s meetings with IMF officials.

“The delegation discussed pathways to complete the seventh review. Miftah Ismail, Finance Minister, laid out his government’s priorities and efforts to bring fiscal discipline while insulating the vulnerable from oil price volatility in the international markets,” said the statement.

The Finance Division said that the IMF had “expressed support” to the Pakistani delegation.

“An IMF mission lead by Mission Chief Nathan Porter will visit Pakistan in May to discuss the issues around subsidies on petrol and electricity announced by the outgoing government,” said the statement.

“Progress of on-going programme loans and projects as well as avenues for further assistance were discussed. The finance minister thanked the bank officials for the financial and technical support provided by the bank throughout. MD Operations also assured full support for Pakistan,” said the statement.

The delegation also met vice president IFC, vice president MIGA and executive directors of the IMF. The newly appointed Finance Minister Miftah Ismail departed for Washington on April 21 to seek the revival of the $6 billion IMF programme signed by the PTI government.

In May 2019, Pakistan and the IMF reached a staff-level agreement on economic policies for a three-year Extended Fund Facility (EFF). Under the agreement, Pakistan was to receive about $6 billion during a period of 39 months, and so far it has received almost half it.

Pakistan was waiting for the IMF to resume talks on its seventh review of the facility which was put on hold due to the political crisis in the country.

If the review is approved, the IMF will release over $900 million and unlock other external funding. With a yawning current account deficit and foreign reserves falling to as low as $10.8 billion, the country is in dire need of external finances. The new government faces a tough task to satisfy the IMF as the subsidies announced by the previous government have worsened the financial situation.