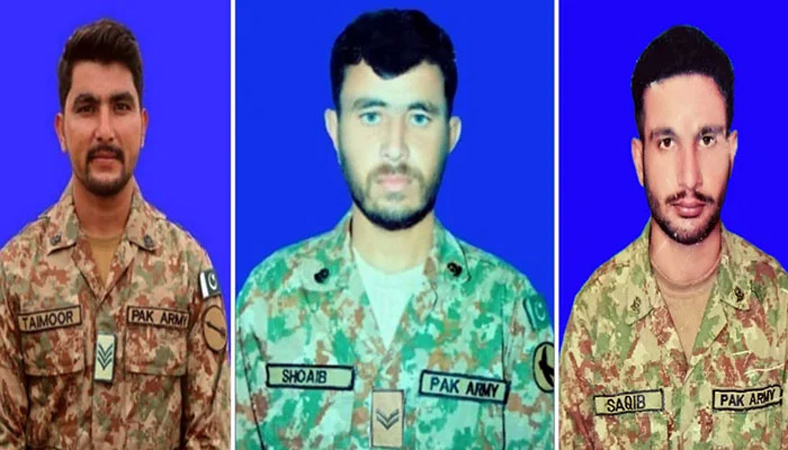 Three soldiers embraced martyrdom in a cross-border attack at the Pak-Afghanistan border, the Inter-Services Public Relations (ISPR) said Saturday. The military’s media wing said terrorists opened fire on the troops from across the border in the Dewagar area, district of North Waziristan. The ISPR said Pakistani troops responded in a befitting manner and as per credible intelligence reports, terrorists suffered heavy casualties. However, during the exchange of fire, three Pakistan Army soldiers also embraced martyrdom, the ISPR added. According to the ISPR, during the gunfight, Havaldar Taimoor (resident of Jhelum, age 30 years), Sepoy Saqib Nawaz (resident of Sialkot, age 24 years), and Naik Shoaib (resident of Attock, age 38 years) having fought gallantly, embraced martyrdom. “Pakistan strongly condemns the use of Afghan soil by terrorists for activities against Pakistan and expects that Afghan government will not allow such activities, in future,” the military’s media wing said. It further added that Pakistan Army is determined to defend Pakistan’s borders against the menace of terrorism and “such sacrifices of our brave men further strengthen our resolve.” Prime Minister Muhammad Shehbaz Sharif Saturday strongly condemned a terrorist attack launched from across the border on the security forces in North Waziristan. The prime minister prayed for the high ranks of the shaheed Havaldar Taimur, Naek Shoaib and Sepoy Saqib. He also prayed for the early recovery of those injured in the attack, said a press release. The prime minister also lauded the courage and resolve of the security forces to protect the country’s borders and maintain peace in the country.

Separately, President Dr Arif Alvi in a telephonic call on Saturday expressed sympathies with the families of martyrs of attack in North Waziristan on April 14. He paid tributes to the martyrs and prayed Allah Almighty to grant them higher ranks in Jannah and give patience to the bereaved families. The President was talking to the families of Havaldar Tariq Yusuf, Sepoy Ejaz Hussain, Salman Waqas, Sepoy Waqar Ahmed, Muhammad Jawwad and Arshad Ali. The President also expressed condolences to the heirs of the martyrs of the attack in South Waziristan on April 12. He also condoled with the families of Major Shujaat Hussain and Sepoy Imran Khan.