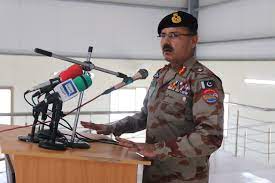 He made this appreciation while addressing an ‘Iftar’ party held at Balochistan Residential College (BRC) Turbat.

The IGFC urged the students to pursue higher education and take the country and the province forward which requires tireless education and hard work. The future of Pakistan and Balochistan is in the hands of the youth.

Principal of BRC Mr. Dawood Baloch welcomed the participants and specially thanked IGFC (S) for their cooperation with the students and educational institutions of Turbat and Makran Division.