More honourable to resign instead of voting for opposition party; Justice Munib Akhtar 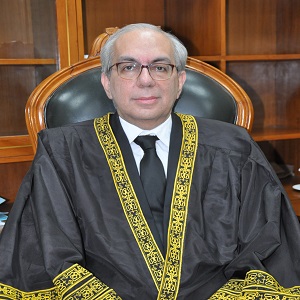 ISLAMABAD: Supreme Court judge Justice Munib Akhtar on Monday said that it was more honourable for a lawmaker to resign instead of voting for the opposition party.

He made these remarks while hearing a presidential reference seeking interpretation of Article 63-A.

Chief Justice Umar Ata Bandial and Justice Jamal Khan Mandokhail were other members of the bench.

During the course of proceedings, Additional Attorney General (AAG) Aamir Rehman pleaded with the court to adjourn the hearing and stated that attorney general Khalid Jawed Khan had resigned from the post.

Upon this, Chief Justice Bandial said that the attorney general’s arguments had already been completed.

Chief Justice Bandial said that all the respondents were here too and this was a case of constitutional debate.

Babar Awan requested the court to hear the party’s separate petition related to dissident lawmakers. He said that this petition had nothing to do with lettergate.

Babar Awan said that it had been a week that the country was functioning without a federal cabinet. He said that the new Attorney General had not been appointed so far and asked who would argue on behalf of the government.

The Chief Justice asked Babar Awan whether he would endorse the attorney general’s arguments. Babar Awan replied that he would not support the former AGP’s arguments in the case. He pleaded with the court to grant him time till tomorrow to present his arguments.

He said that a vote was a trust that a political party gave to an MNA. He said that conscience could not be sold for money. Lawmakers could be forced to pass anti-national  legislation in return for money, he added.

He said that the situation in Punjab was in front of everyone and all the stakeholders were looking at the court.

He pointed out that dissident lawmakers could not even go out in public today.

Justice Jamal Khan said that the parliament had not clarified about lifetime disqualification.

The AG Islamabad said that the court was responsible for interpreting the Constitution.

Justice Jamal Khan Mandokhail said that the parliament should be allowed to make amendments itself.

Chief Justice Bandial said that amendments to the Constitution were made in 1998 when decisions on horse-trading were taken and Article 63-A was included in 2010, under the 18th Amendment. He said that violating Article 63 could not be turned into a case of treason.

The AG said that dissenting from party policies meant deviating from the oath of the parliament.

Justice Mandokhail asked if the court could include the clause of lifetime disqualification itself.

The AG said that the court had already decided on lifetime disqualification while interpreting Article 62(1)(f).

Balochistan National Party (BNP-Mengal) counsel Mustafa Ahad said that the president had asked the court to rewrite the Constitution in the reference but Article 63-A was completely clear.

Justice Munib Akhtar clarified that voting on constitutional amendments and for an opposition party were two separate things.

The counsel said that confining a lawmaker to follow the party leadership was equivalent to slavery. Upon this, Justice Akhtar addressing the counsel said that according to his arguments, he was denying parliamentary democracy. If anyone disagreed with the party policy, leave the party and could come back by independently contesting the by-election, he added.

He said that those declared dissidents by the Constitution could not be deemed credible.

Subsequently, the hearing of the case was adjourned until Tuesday.