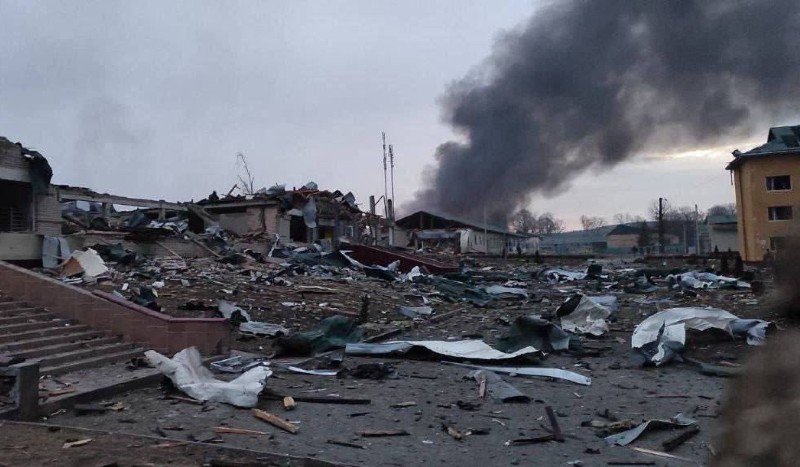 Lviv, Ukraine: Airstrikes killed at least seven people in Ukraine’s western city of Lviv on Monday, as Russia pounded targets across the country and massed forces for an expected all-out assault in the east.

The airstrikes in Lviv came just hours after Ukrainian President Volodymyr Zelensky accused Moscow of wanting to “destroy” the entire eastern region of Donbas bordering Russia. Russia’s defence ministry said it had hit 16 military targets at various locations across Ukraine. Following the attack on Lviv, black smoke billowed from the gutted roof of a car repair shop in the northwest of the city as air raid sirens wailed.

“Fires were set off as a result of the strikes. They are still being put out. The facilities were severely damaged,” Lviv regional governor Maksym Kozytsky said on social media. In the south, Russia continued its push to capture the besieged port city of Mariupol where the last remaining Ukrainian forces prepared for a final stand.

Ukraine has pledged to fight on and defend the strategic city, defying a Russian ultimatum for remaining fighters inside the encircled Azovstal steel plant to lay down their arms and surrender. – Prisoner swap – Russian state TV on Monday broadcast a video of what it described as “Britons” captured fighting for Ukraine and demanding that Prime Minister Boris Johnson negotiate their release.

The two haggard-looking men asked to be exchanged for Viktor Medvedchuk, a Ukrainian tycoon close to President Vladimir Putin, who was recently arrested in the pro-Western country. Ukraine then aired its own video featuring Medvedchuk calling for his exchange in return for an evacuation of civilians and troops from Mariupol. “I want to ask Russian President Vladimir Putin and Ukrainian President Volodymyr Zelensky to exchange me for Ukrainian defenders and residents of Mariupol,” he said in the video published by Kyiv’s security services, wearing black clothes and looking directly into the camera.

Mariupol has become a symbol of Ukraine’s unexpectedly fierce resistance since Russian troops invaded the former Soviet state on February 24. While several large cities were under siege, according to Prime Minister Denys Shmyhal, not one — with the exception of Kherson in the south — had fallen, and more than 900 towns and cities had been re-captured.

Capturing Mariupol would allow Russia to have a land bridge between the Crimea peninsula, which it annexed in 2014, and the two Moscow-backed separatist statelets in Ukraine’s east. – ‘Last chance to save you’ – In the east, Ukrainian authorities urged people in Donbas to move west to escape a large-scale Russian offensive to capture its composite regions of Donetsk and Lugansk. “Russian troops are preparing for an offensive operation in the east of our country in the near future.

They want to literally finish off and destroy Donbas,” Zelensky said. Lugansk governor Sergiy Gaiday said the coming week would be “difficult”. “It may be the last time we have a chance to save you,” he wrote on Facebook. Heavy bouts of shelling also resumed in the country’s second city of Kharkiv on Monday morning, according to an AFP reporter on the ground.

The shelling comes a day after at least five people were killed and 20 wounded during a string of strikes in the city just 21 kilometres (13 miles) from the Russian border on Sunday. More than 4.9 million Ukrainians have fled their country, the United Nations said Monday warning of the risks of women and child refugees being exploited.

Refugees from Ukraine, the vast majority women, and children, face increased risks of sexual exploitation, abuse, and human trafficking,” the UN refugee agency said. – ‘Genocide’ – Ukraine officials also said on Monday they were halting the evacuation of civilians from frontline towns and cities in the east for a second day, accusing Russian forces of blocking and shelling escape routes.

“In violation of international humanitarian law, the Russian occupiers have not stopped blocking and shelling humanitarian routes,” Deputy Prime Minister Iryna Vereshchuk said on social media. But Lugansk governor Gaiday announced earlier that he had proceeded with evacuations.

“At our own peril and risk, we took out several dozen people anyway, but it’s already dangerous,” he told Ukrainian media. During an interview with CNN broadcast on Sunday, Zelensky said he had invited his French counterpart Emmanuel Macron to visit Ukraine to see for himself evidence that Russian forces have committed “genocide” — a term Macron has avoided.

“I just told him I want him to understand that this is not war, but nothing other than genocide.” Zelensky, describing the situation in Mariupol as “inhuman”, has called on the West to immediately provide heavy weapons — a request he frequently airs. But Russia has warned the United States this week of “unpredictable consequences” if it sent its “most sensitive” weapons systems to Ukraine.