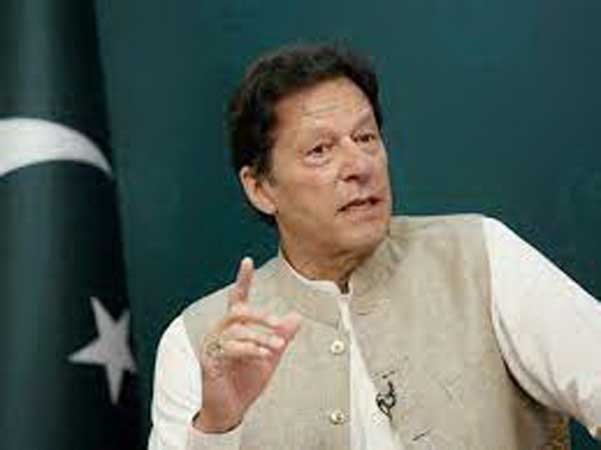 PTI Chairman Imran Khan Sunday condemned the violence and ruckus that took place in the Punjab Assembly and said such an act was against the norms of democracy and the Constitution.

Taking to Twitter, the PTI chairman wrote: “What happened in the Punjab Assembly was condemnable & against all democratic norms and constitutional provisions. No one was in the chair conducting the supposed elections – a total violation of all norms. We reject this sham mafia-captured “elections”.

The assembly session was scheduled to start at 11:30am on Saturday. However, it was delayed as PTI and PML-Q lawmakers resorted to violence.

At least three PTI members of the Punjab Assembly were arrested for attacking Deputy Speaker Dost Mohammad Mazari as the party boycotted the session to elect the new chief minister.

They attacked the deputy speaker and pulled his hair despite presence of security guards. The deputy speaker left the hall after this and the session was delayed. Before assaulting Mazari, the PTI lawmakers caused a ruckus when they brought “lotas” to the house and started chanting “lota, lota” (turncoats) as they lashed out at the dissident PTI MPAs who parted ways with the party and decided to support the Opposition before the ouster of Imran Khan.

As the situation got intense and requests were made for the police to control the situation, the anti-riot force personnel entered the assembly wearing bulletproof jackets and arrested the PTI MPAs.

The police entered the premises of the Punjab Assembly through the old building and took control of the situation.

Amid the ruckus, Elahi, who was a candidate for chief minister, was also not spared as well and became a target of violence in the assembly that left him injured.

“They have rewarded me well in return for my goodness,” said Elahi, who got his hand bandaged after he was injured during the ruckus.

“Has this ever happened to any speaker before,” asked the PML-Q leader, adding that everything was pre-planned.

They crossed all lines today trying to manhandle me in an attempt to “finish me”, he said.

Elahi said that the courts were not for the poor and he will ask for justice from God.

“Whatever happened today in the assembly is to be blamed on Deputy Speaker Mazari,” he claimed. The PML-Q leader further said that the deputy speaker brought the violence upon himself.

“Who will accept their voting,” asked Elahi. He alleged that the members of the government were “dictators” and “real enemies of democracy”.