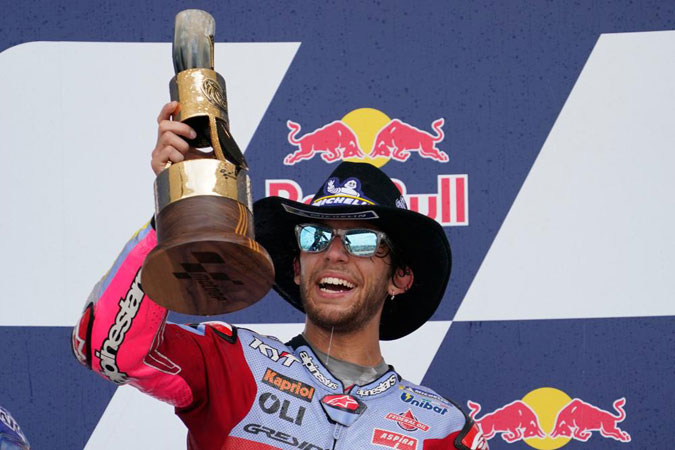 AUSTIN: Italy’s Enea Bastianini won his second MotoGP race of the season at the Grand Prix of the Americas on Sunday and seized control of the world championship. The 24-year-old passed fellow Ducati rider, and long-time leader, Jack Miller with five laps left to add the Austin win to his maiden elite class victory at the season-opener in Qatar. Australian Miller, who had stormed into the lead at the start, finished third having also being passed by the Suzuki of Alex Rins, the winner in Texas in 2019. Six-time MotoGP champion Marc Marquez, bidding for an eighth win in nine visits to the Texas circuit, finished sixth, having slipped to the back of the field at lights out on his Honda. The 29-year-old Spaniard, who missed last weekend’s race in Argentina due to double vision after a violent high-side crash in Indonesia, had started ninth on the gird, his worst qualifying performance ever at the Circuit of the Americas. However, he stormed back through the field into the top 10 at the midway point, even setting a fastest lap.

Fourth on Sunday was Suzuki’s Joan Mir, the 2020 world champion, with Francesco Bagnaia on another Ducati coming home fifth. Reigning world champion Fabio Quartararo of Yamaha was seventh behind Marquez with pole-sitter Jorge Martin on a Ducati-Pramac having to settle for eighth. Previous world championship leader Aleix Espargaro of Aprilia was only 11th on Sunday. In the Moto2 race, Italy’s Tony Arbolino claimed a maiden victory by 3.4sec over Ai Ogura. Britain’s Jake Dixon took third to secure his first ever podium while American pole sitter Cameron Beaubier failed to finish. Jaume Masia won the Moto3 race, his first success since Qatar last year. Dennis Foggia was second and takes over the world championship lead while Andrea Migno was third. Former series leader Sergio Garcia failed to finish. The fifth round of the 2022 world championship is the Portuguese Grand Prix on April 24.