No, Imran, no remittances: PTI activists hold demos in London 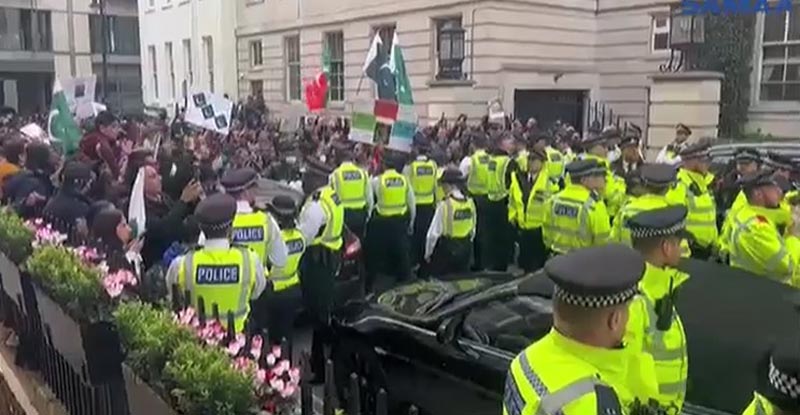 Dozens of Pakistan Tehreek-e-Insaf (PTI) activists held protests in London on Sunday against the removal of Imran Khan as prime minister of Pakistan and said that they would not send remittances back home until the PTI leader returned to power, a private TV channel reported.

The PTI workers staged a sizeable protest in London’s Hyde Park while a group of activists also arrived outside the residence of PML-N Supremo Nawaz Sharif.

Outside Nawaz’s Avenfield residence, dozens of PML-N supporters were holding celebrations and the slogans raised by PTI workers were drowned in loud beatings of dhol.

Reports said that the PTI had planned to hold a protest outside the US embassy in London against the “regime change” but then decided to protest outside Nawaz Sharif’s residence. London police had to send reinforcements to ward off a clash between political workers.

The Hyde Park demonstration drew a larger number of protesters who gathered from different parts of the city. “No Imran, No remittances” was one of the key slogans raised at the protest.

The protesters said that only Imran Khan could save the country.

They decried the “regime change” and said that they were not ready to see opposition leaders running the country.