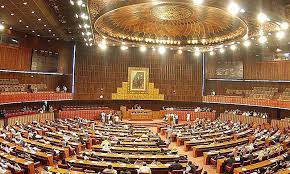 Despite the PTI government’s hectic efforts to avoid voting on the no-confidence motion against Prime Minister Imran Khan, the historic session of the National Assembly to decide his fate began on Saturday at 10:30am — and after three breaks, the session resumed after iftaar.

Shortly afterwards, and to the dismay of Opposition members, the session was adjourned once again till 9.30pm. Meanwhile, sources told Geo News that as per the plan of the government, the voting might not take place today at all.

NA Secretariat sources, on the other hand, say the session will likely continue till 12am.

NA Speaker Asad Qaiser refused to allow the voting, adding that since he shares a 30-year-long relationship with PM Imran Khan, he cannot betray him.

During the first break — which lasted more than two hours —  the Opposition held a consultative meeting in the Leader of the Opposition Shahbaz Sharif’s chamber to discuss a counter-strategy for the government’s alleged plan to prolong the session so that voting could not take place today.

But later, the government and the Opposition reached a consensus regarding maintaining order in the House and allowing the speeches to take place uninterrupted, per source