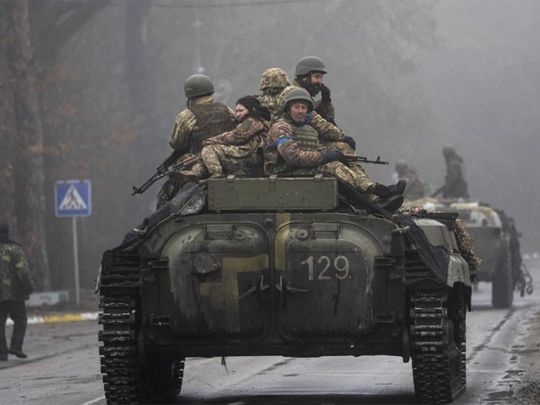 Brussels: Ukrainian Foreign Minister Dmytro Kuleba said Thursday he expected NATO members to send Kyiv the weapons it needs but insisted they had to act quickly before Russia launches another major offensive.

“Either you help us now — and I’m speaking about days, not weeks, or your help will come too late, and many people will die, many civilians will lose their homes, many villages will be destroyed. Exactly because this help came too late,” Kuleba said after meeting NATO foreign ministers in Brussels. “I have no doubts that Ukraine will have weapons necessary to fight. The question is the timeline. This discussion is not about the list of weapons.

The discussion is about the timeline,” he told journalists. Ukraine is pushing the West to increase its arms supplies with heavier weaponry including air defence systems, artillery, armoured vehicles, and jets, as Moscow refocuses its offensive on the east of the country. “The battle for Donbas (in eastern Ukraine) will remind you of the Second World War with large operations manoeuvres, the involvement of thousands of tanks, armoured vehicles, planes, artillery,” Kuleba said.

“Russia has its plan, we have ours — and the outcome of this battle will be decided on the battlefield.” Asked about video footage circulating on social media of Ukrainian soldiers allegedly shooting a Russian captive, Kuleba said “there might be isolated incidents”, but that Ukraine’s army “observes the rules of warfare” and that violations would be investigated.

However, he added, observers failed to understand how it feels after seeing pictures of atrocities on the battlefield compared to “knowing that the person you know was raped four days in a row”. “This is not an excuse to those who violate the rules of warfare on either side of the frontline, but there are some things which you simply can’t understand, I’m sorry.”