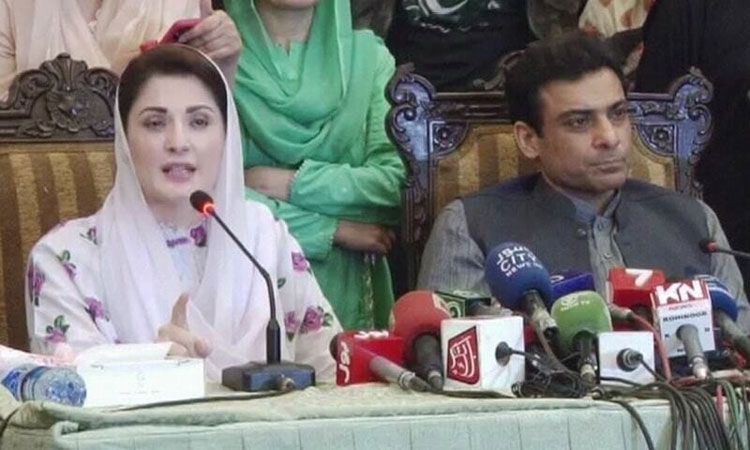 After the Punjab Assembly was fenced off with a barbed wire, the opposition held a meeting at a local hotel where it passed a resolution electing PML-N leader and opposition leader Hamza Shehbaz as the symbolic Chief Minister (CM) with 199 votes.

PML-N Vice President Maryam Nawaz had announced to go to the Punjab Assembly to express solidarity with Hamza Shehbaz, after which she reached the hotel. The meeting was chaired by Shazia Abid, a member of the chairman panel. All the women members of PML-N also attended the meeting. Maryam Nawaz Sharif became emotional and hugged Hamza Shehbaz while congratulating him.

Maryam and Hamza boarded the bus to show solidarity with the Punjab Assembly members. Meanwhile, Maryam continued to respond to the workers slogans by waving hands, says a news report.

Weeping after witnessing the ceremony, Maryam told a news channel that her tears were the tears of victory, as she prayed for her deceased mother, Kulsoom Nawaz, who died at a hospital in London. Members of PML-N, Aleem Khan Group, Tareen Group and Cheena Group also arrived at the hotel.

PML-N leader and MPA Rana Mashhood Ahmad Khan claimed that more than 200 MPAs were present in the session. After the resolution to elect Hamza as the new chief minister was accepted, the session witnessed loud chants, including “chief minister, Hamza Shahbaz”.

Speaking after the victory in the meeting, Hamza Shehbaz said the House elected him and distrusted Imran Khan.

“Where are the claimants of Madina state taking the country to? I also thank Tareen Group and Aleem Khan Group. The spectacle being staged in the Federation, Punjab is a toy against the Constitution.” He said not a single rupee corruption could be proved against him adding that Usman Buzdar had been taking money for setting up SHO, while Pervaiz Elahi Sahib will have milk and water with the power of vote. He said whatever illegal action was taken by the administration of Pervaiz Elahi, it will be accounted for.”I want to say to the Supreme Court that the people are looking towards you. The Constitution and the law have been trampled for the sake of their personal ego. I tell all the patriotic institutions of Pakistan not to forget the millions of sacrifices. I thank Shehbaz and Nawaz Sharif for trusting one worker; I am a worker of PML-N. Whatever Imran Niazi said, all the promises proved to be false.

“These people are playing with the Constitution […] they cannot understand what is happening with them in Punjab and the Centre,” Hamza told journalists, who are expected to have a tough competition with Elahi for the top slot. The PML-N leader slammed the PTI government for derailing the economy and worsening the crisis. “The stock market is bearish, while the dollar has reached a historic high.”

Maryam Nawaz said in her tweet that Hamza Shehbaz has been elected as the new Chief Minister of Punjab with 199 votes of the opposition members.

Talking to journalists alongside Hamza after the session’s conclusion, Maryam said the Opposition leader in the Punjab Assembly followed PML-N supremo Nawaz Sharif’s ideology and would “serve” the people of the province.

“Today, Nawaz Sharif took the revenge [from the PTI government] that stole the mandate of the people of Punjab. Blood was shed to restrict PML-N from forming a government in Punjab,” Maryam told journalists.

The PML-N leader said Punjab’s people were tuned into “beggars” just for two kilogrammes of sugar. “They (PTI government) were involved in the theft of sugar, power, gas, and development.”

Maryam said she was “ashamed” after the Punjab Assembly was locked and journalists and members of the assembly were barred from entering the building.

“Come and count, the representative of 200 MPAs – Hamza Shahbaz – is present here. We have seen dictators [violate the Constitution], but Imran Khan has proved that he is the first civil dictator of Pakistan,” she said on the government sealing off the Punjab Assembly.

Moreover, Maryam said despite Usman Buzdar being the chief minister, it was Farah Khan – a close friend of PM Imran Khan’s wife, Bushra Bibi – who controlled him.

The PML-N leader went on to say that when the time comes, everything will be revealed.