Great leaders emerge but rarely in the destiny of nations. Pakistan was desperately in search of one such leader.

Imran Khan’s oratory convinced the nation that he was going to single-handedly perform miracles and bring peace, progress and prosperity by ending the cancer of corruption. He endlessly talked of the ills that plague Pakistan. He made tall promises of nabbing the thieves of state, which won him a tremendous following. He thus awakened the hopes and dreams of a new Pakistan, in the young and old, the rich and the poor, the uneducated and the highly educated, alike. This had a precedent in Pakistani history, in the person of Zulfiqar Ali Bhutto.

Imran Khan and Zulfiqar Ali Bhutto had much in common. Both moved into elite western circles and discovered that it was a world they could never truly be a part of, being brown and Muslim. Both returned to Pakistan and used rhetoric to gain a massive following. Neither had an agenda beyond self-interest. They both used the Islamic card aiming to become a leader of the Islamic world, to gain weight to throw around.

A true leader motivates people to sacrifice, persevere and excel. He inspires genuine change in the attitudes and behaviours of the nation. Quaid e Azam convinced the Muslim north Indian elite to abandon their homes, property and land holdings and migrate to live like paupers to create a new country. His integrity and charisma made it happen.

A professor of psychology at Cornell University, Frank Yeomans, explained that the “Malignant narcissist” personality takes pleasure in both self-aggrandizement and the destruction of others. Such men, when they assume positions of leadership, reap the “paltry harvest” by spreading conspiracy theories to the “captive minds” of their followers.

The common man does not know the gaffes that Imran Khan committed in diplomacy, but he knows that the state has failed him when he struggles to feed his family.

Bhutto broke the country into two and destroyed the economy. Imran Khan weaponized faith and vilified “all other politicians” as the definable person or group to blame for all problems.

The victory speech of Imran Khan at the 1192 Cricket World cup opened with the personal pronoun “I.” His interviews with international media, days before his 2018 election victory were all about his success. When he was proclaimed the prime minister, he myopically directed his address at the opposition and accused them of corruption. He established early on that he was a politician and not a leader.

He played to a gullible audience, which lacks maturity and wisdom. Pakistan is prone to corruption, due to the nation’s laziness, greed and lack of enterprise. We are far from an industrious nation. We love shortcuts and easy gains, and ethics is the least of our concerns. There is no shortcut to success but the nation lives in denial. Hero worship is the trait of the foolish and the lazy.

To avoid any change in their character, Pakistanis hero-worship leaders. They love rhetoric: When a politician promises the sun, moon and stars, they believe him. Even well-educated people believed that Imran Khan would recover stolen public wealth. This is because we lack an intelligentsia that could educate them about the workings of global finance. Even graduates of the top Pakistani business schools have zero ideas about the western controlled international monetary system.

The same people-whose bellies are full despite the inflation-are still in favour of Imran Khan, seeing him as a bold and self-respecting leader. Those who are struggling with making ends meet have given up chasing a mirage offered by the PTI. The common man does not know the gaffes that Imran Khan committed in diplomacy, but he knows that the state has failed him when he struggles to feed his family.

Inflation, power shortages, food insecurity, trade, and diplomatic handling are the main jobs of any Pakistani leader. This is so as the military takes care of national security. In his political struggle for two decades, Imran Khan planned to fail when he failed to plan. This was evident on day one in office when he continued to refer to stolen state wealth in the past. Pakistan-despite being an agricultural country- is now an importer of wheat, cotton, lentils and sugar and palm oil at high rates. We also pay too much for electricity to private power companies, especially when we make payment for 38,000 MW of power, against an average usage of 19,000 MW due to low capacity utilization-owing to a lack of infrastructure. The rise in oil prices, due to the Russian-Ukraine war, was the straw that broke the camel’s back. We are seeing unprecedented inflation because we cannot afford to pay our import bill, let alone service our exponentially rising external debt. To quell the public, Imran Khan’s government reduced the sales tax on petroleum for the common man. This gimmick does nothing for solving the crises that plague us.

Imran Khan endlessly praised the systems and institutions of the west, yet did absolutely nothing to reform state institutions.

He ended up violating the constitution of Pakistan, to remain in power. He accused major political leaders and a big group of parliamentarians of high treason when he addressed the nation on television and waved a letter, calling it a US conspiracy to topple him.

A head of state has to weigh his words before he speaks. Imran Khan commits blunders owing to his incessant speech-better suited for his cricketing commentary days. Imran Khan lacks the wisdom to stay silent. His diplomatic gaffes have been plenty, which is unforgivable at his level. However, now he has even become guilty of high treason by lying to accuse the US and the former parliamentary opposition of a conspiracy against the Pakistani state. He is also inciting his party supporters to wage mass protests in his favour.

His audacity is coupled with a complete lack of wisdom. Imran Khan has lived off rhetoric alone, in his years in power. He failed to devise an effective economic policy, foreign policy, security policy and engineer institutional reforms within the public sector. Corruption thrived during his tenure. He spells doom for Pakistan. Srilanka is a case in point, for anyone who still has delusions about Imran Khan. Srilanka has a literacy rate exceeding 90 per cent and it had succeeded in quelling a civil war that lasted over three decades. Srilanka’s garment industry was covered by Harvard Business Review in their case studies. Tourism was thriving, but the Russia-Ukraine war put a damper on it. In addition, their new government lowered taxes and attempted a shift to organic agricultural farming, with zero imports of chemical inputs. They also carried the increased burden of debt servicing and oil payments in the current environment. Srilanka tried to restructure its debt but failed. The unavailability of food, petrol and medicines, led to riots. Emergency rule has now been imposed.

Srilanka’s tragic state is pretty much the trajectory of Pakistan unless we wake up.

The writer is an independent researcher, author and columnist. She can be reached at aliya1924@gmail.com. 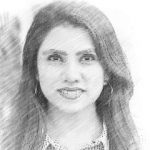 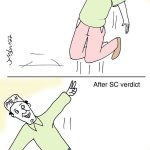