‘As of right now’ Tiger Woods will play Masters 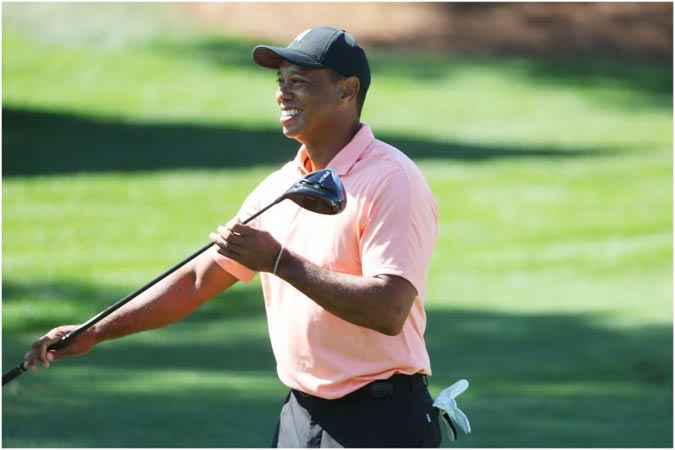 AUGUSTA: Tiger Woods expects to play the Masters — and what’s more, he expects to have a chance to win it. Fourteen months removed from a rollover car crash that left him with severe lower right leg injuries, the 15-time major champion said he plans to tee it up in the 86th Masters starting Thursday at Augusta National. “As of right now, I am going to play,” Woods said in a press conference at the iconic Georgia club, where his presence in the practice rounds had already electrified fans and rival pros alike. Woods, who won his fifth career Masters title in 2019 to cement his comeback from spinal fusion surgery, said he would play another nine-hole practice round on Wednesday and make a final decision when he sees how his leg recovers from that effort.

“It’s a matter of how my body is going to recover and what my body is able to do the next day,” said Woods, who has played nine-hole practice rounds the past two days. Woods said the biggest challenge of the week figures to be simply walking the undulating course spread under towering pines, where, he says, “the only flat spots out here are the 18 tee boxes”. Asked which was more troublesome for his surgically pinned-together right leg, uphill, downhill or sidehill lies, Woods said simply “All”. Despite the lack of mobility in his leg, the physical pain he feels “each and every day” and the uncertainty of his ability to recover adequately after each round despite an elaborate treatment regimen, Woods has no doubts about the state of his game.

If he can walk the course and keep the swelling in his leg down, Woods believes he has a chance to collect a sixth green jacket come Sunday, matching the all-time record of Masters titles held by Jack Nicklaus. “I do,” he said. “I don’t have any qualms about what I can do physically from a golf standpoint. You know, 72 holes is a long road, and it’s going to be a tough challenge and a challenge that I’m up for.” Woods was hospitalized for weeks and unable to walk for months after his crash in February 2021. He later said he was lucky to have survived and to have escaped having his leg amputated.

“That was a tough road,” Woods said. “To say I was going to be here playing… I would have said very unlikely.” Woods set the golf world alight when he played a practice round at Augusta last week, having indicated as recently as February that he didn’t expect to be ready to return to competition in time for the year’s first major championship. On Sunday, Woods tweeted that it would be a “game-time decision” as to whether or not he would play this week.

The 46-year-old has battled through injury before, winning the 2008 US Open with a stress fracture in one leg and after years of back trouble had spinal fusion surgery in 2017. With his 2019 Masters triumph he captured his first major title in more than a decade.