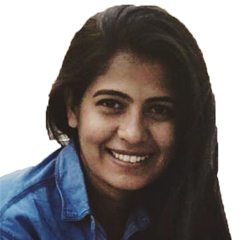 The 2015 annual report of the Human Rights Commission of Pakistan (HRCP) stated, “The database recorded 987 cases of honour crimes in 2015 with 1,096 female victims.”

Our girls live in a situation of uncertainty, where they know that each step they take is being watched. Innocent lives are being taken by guilty men, and even the police is unable to do anything because it is a matter of family ‘honour’ that has decided to take the life of another female.

We read news that in the name of ‘honour killing’ many girls have lost their lives. Let me state here: it is ‘dishonour killing’ because real honour cannot snatch anyone’s life. Greed and cowardly acts take an innocent life, and then try to get shelter under the name of honuor to justify the crime. When will our state openly call it dishonour killing in order for people to fully realise that killing a woman in the name of honour is never an ‘honourable’ act? People need to remove the mask from the face of society, which has been there for ages. Too many people have being guided in the wrong direction in order for maintenance of power of local feudal lords. Shall we ask them: what are parameters to measure the honour of women? If men have honour, then the same rule of honour applies to women. Women too can demand honour on actual facts; would it be acceptable if they used an imaginary sword of honour? Why the formula of honour applies only to men, and why is there none for women? I leave this question to our society.

No one accepts killing of anyone, but society has been using words of honour so as to justify taking of lives of women. Whenever we raise our voices on women’s issues, we are told that it is a ‘western’ agenda. I wonder, why asking for justice is only a western agenda; why it is not our agenda. It is indeed shameful; most people in a position of power cannot distinguish between human rights and agendas. For instance, if someone says that raising voices on human rights issues for women are a western agenda, ask them what they have done. They cannot even provide basic human rights to their citizens. If they call human rights issues a western agenda, what are the rights politicians promise the people they are supposed to be representing? If human rights issues are western agenda, then the west is better than our society. Their societies have grown and developed because of the place they assign to human rights, here in Pakistan, you are beating drums against women’s basic rights. There are many names on the list of women who have been killed in the name of what I call dishonour killing. Asking for rights for women or condemning violence against women is not a western agenda.

The HRCP reported the number of women who were killed in the name of honour, but how many statistics does the state need to realise that its laws have failed to protect people? How many decades does our traditional system or government need to understand that honour killing is an unacceptable crime? Every year human rights organisations publish reports, and every year, government repeats its promises of ensuring safety for women.

Unfortunately, every day we have the same story of violence in the name of dishonour killing. Maybe, while I’m writing this column, another girl has been killed somewhere, and there would be no news of her death in media. Moreover, many cases are not reported due to local influence, disabling local reporters to do their job of fair reporting.

It is, therefore, safe to assume that there are more cases than there are reports. It is important that the state must look into weaknesses of the legal system, as the audacity with which these crimes are perpetuated makes it obvious that killers do not have any fear of the law. If the state says that its law works and killers have been punished, then let us know how many criminals have given up their guns. The answer: not many.

Most people are unable to raise their voice against violence. And therefore, it was heartening to see a positive response by Prime Minister Nawaz Sharif towards Sharmeen Obaid-Chiony’s documentary, A Girl in the River: the Price of Forgiveness, a short documentary film on honour killings in Pakistan. The film went on to win the Oscar for best film in its category. The film reiterated the need to have governmental attention to cases of honour killing, and the prime minister promised to have proper legislation to ensure penalisation of culprits of violence against women in the name of honour. If government does not take into account the gravity of an issue, the promises of leaders remain mere words. In a state of such indifference, crimes against women go on unabated.

Unfortunately, despite what the prime minister said not much has happened to strengthen laws against perpetrators of crimes against women. Sharif addressed the nation to clear his family’s name in the Panama Papers issue, but the names of girls and women who have been killed in the name of dishonour killing have not come up anywhere. “On March 1, father killed his daughter in Lahore.” “On March 2, brother killed his two sisters in Sahiwal.” “On April 1, on her wedding night, a teenaged girl was killed in Jacobabad.” “Another girl’s honour was sold for three maunds of wheat in Umerkot.”

Women are not only being killed but are also being sold in open market of the so-called honour keepers. We all know when a democratic system is tainted by selective justice, be they feudal or religious lords, most go against women’s rights. We should say to human rights organisations that their job is not merely to present a yearly report on the number of women who are killed by their families, but that they also raise voice for those victims.

It is very tragic that we have selective honours and selective voices; both these selective approaches are creating hurdles to reach the real path of equal human rights. If a girl is killed in a remote area, there is no real media coverage or importance given to that in big cities like Lahore, Karachi and Islamabad. If a case happens in a major metropolitan, human rights organisations start making noise about it. I may not know much but what I know is the bitter truth that the sword of selective honour kills innocent lives, and that selective voices cannot build a strong platform to give a wake-up call to government to ensure that its laws protect all its citizens including women.

The writer is a Karachi-based journalist, and a freelance columnist. She can be reached at veengas.journalist@gmail.com and on Twitter at @veengasj