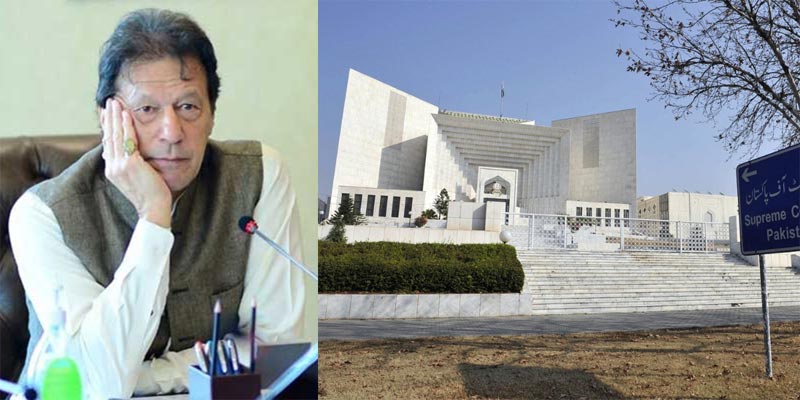 The Supreme Court Sunday barred all the state institutions from taking any ‘extra-constitutional’ steps in the wake of dismissal of vote on the no-confidence vote in the National Assembly against Prime Minister Imran Khan and subsequent approval by President Alvi to dissolve the assembly at the advice of the prime minister.

A three-member bench of the apex court – led by Chief Justice of Pakistan (CJP) Justice Bandial and comprising Justice Ijazul Ahsan and Justice Muhammad Ali Mazhar – heard the matter. The chief justice observed that public order must be maintained and no state functionary shall take any ‘extra-constitutional’ step in the prevailing political situation.

After issuing notices to the Attorney General for Pakistan and others on the matter, the chief justice adjourned the hearing till Monday (today). The apex court also directed the AGP to determine the constitutionality of NA speaker’s ruling. Earlier, CJP Bandial arrived at the apex court, which was especially opened on a Sunday in light of the day’s unusual turn of events.

The leaders of the joint opposition as well as PTI’s ministers also arrived at the SC. The opposition has dismissed the ruling party’s actions as unconstitutional.

The petition filed by the opposition maintained that it is “most respectfully prayed that the act of the Deputy Speaker by proroguing the Session of Parliament on the vote of No Confidence Motion may be held to be in violation of fundamental rights of the people of Pakistan and against Article 66, 95, 17(2) and other enabling provisions and this act and all consequences thereafter may be set aside by declaring the same illegal, ultra vires to the Constitution and consequently the Speaker/ Deputy Speaker National Assembly may be directed to conduct the vote count on No Confidence Motion of the members present in the National Assembly on the floor of the house and declared the result of the No Confidence Motion.

“It is further prayed that the respondents may be directed not to interfere with the vote count and smooth voting on the resolution of No Confidence of the Prime Minister as per the Agenda today. “It is also prayed that the Respondents and other delinquent persons involved in abrogating and subverting the Constitution may also very graciously be tried with and dealt strictly with in accordance with the law. “Any other direction or relief which this Honorable Court deems fit and proper in the vindication of grievance aforesaid.”

The Supreme Court Bar Association (SCBA) also filed a constitutional petition with the Supreme Court in light of Sunday’s events. The lawyers’ association prayed in its petition that the SC declares the “impugned order of dissolution of the National Assembly issued under Article 58(1) of the Constitution is without lawful authority and of no legal effect.”

It urged the apex court to declare that the speaker could not give a ruling after the resolution for the vote of no-confidence was moved on March 28. “Declare that all acts of the Respondents dated 03-04-2022 and all acts, directions, instructions, orders etc. taken by the Respondents or any other state functionaries in pursuance of the impugned order of dissolution of the National Assembly are without lawful authority and of no legal effect,” the SCBA’s petition further maintained. The resolution of no-confidence was sought to be declared still pending before the National President Dr Arif Alvi Sunday dissolved the National Assembly on the advice of Prime Minister Imran Khan as the PTI government evaded the no-confidence motion.

As the session started, former law and information minister Fawad Chaudhry read out Article 5 of the Constitution and accused the opposition of “disloyalty to the state.”

The former minister apprised the National Assembly about an “international conspiracy” to topple the democratically-elected government in Pakistan.

Fawad said in a normal situation, a no-confidence motion was moved under Article 95 of the Constitution, but in this case, he requested the chair to invoke Article 5(1) of the Constitution which stated “loyalty to the state is the basic duty of every citizen” while keeping in view the fact that it was being moved under an “international conspiracy”.

The minister told the house that on March 7, Pakistan’s ambassador was summoned to an official meeting by a country – which PM Imran Khan has said was the United States – with the team of note-takers and was informed that a no-trust motion would be moved against the prime minister.

On March 8, he said the motion was submitted against the prime minister to the National Assembly Secretariat.

The minister said it was unfortunate that the regime change plot was being carried out at the behest of foreign elements under a conspiracy, adding that some of the government allies and PTI members also joined the plan.

“It is not the matter of no-confidence, it is a blatant violation of Article 5(1) of the Constitution,” he said putting a question before the House on whether foreign assistance could be taken for regime change in Pakistan?

“There should be a ruling on Article 5 (1),” he requested the chair.

At this, National Assembly Deputy Speaker Qasim Suri termed the no-confidence motion against the premier “unconstitutional”, saying that it was backed by “foreign powers”.

The deputy speaker then quickly disallowed voting on the no-trust motion and adjourned the session for an indefinite time – inviting strong criticism from the Opposition.

Before the session took place, a delegation of the opposition lawmakers submitted the no-trust motion against National Assembly Speaker Asad Qaiser to the NA Secretariat.

“[…] the resolution for removal from office of the Speaker Asad Qaiser under paragraph © of clause (7) of Article 53 of the Constitution of the Islamic Republic of Pakistan, read with Rule 12 of the Rules of Procedure and Conduct of Business, 2077,” the document read.

But despite the deputy speaker adjourning the proceedings, the opposition sat in the National Assembly and debated the no-confidence motion, with ex-speaker and PML-N leader Ayaz Sadiq charing the session.

Another stunt that the government pulled off was switching off the lights of the lower house of parliament, which seemed like an attempt to either disrupt their political activity or to send them out of the premises.

A total of 197 opposition members voted in favour of the no-confidence motion.

Deputy Attorney-General Raja Khalid Mahmood Khan tendered his resignation after PM Imran Khan sent a proposal to the President to dissolve the assemblies.

“The constitution has been violated and I can no longer defend the government,” he said, adding that the ruling given by the deputy speaker was “unconstitutional.”

“I condemn the ruling which is unconstitutional and against democratic values,” he said.