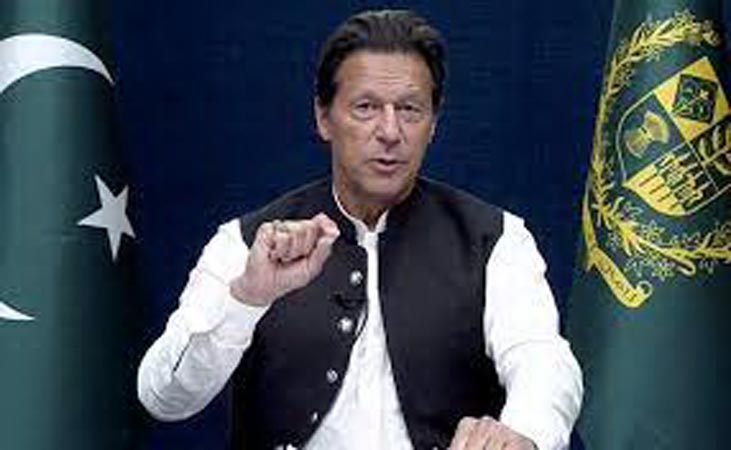 Shortly after the National Assembly session was adjourned, Prime Minister Imran Khan asked the nation to gear up for fresh polls as the opposition lashed out at the government for dismissing the no-confidence motion as “unconstitutional”.

Imran’s brief address to the nation was telecast live in which he said he was pleased with the NA deputy speaker’s ruling and congratulated the nation on the development.

“The NA speaker has rejected the move intended at changing the regime and I congratulate the entire nation on it […] Pakistan came into existence on 27th Ramazan, and this nation will not let such a conspiracy get successful.” He said the NA deputy speaker made the decision using his constitutional right. “In a democratic society, the democrats look towards people, elections are held, and people decide who they want as the ruler.”

The prime minister said all the money spent on “buying loyalties” will get wasted. He told the masses that whoever has taken this money still has the chance to spend it on charity, says a news report.

“No foreign power or any corrupt elements, but only you have to decide for this country.” He said that as soon as assemblies will be dissolved, the process of a caretaker government will start.

Later, while addressing the former parliamentarians, the prime minister, who will continue to remain in office under Article 224 till the appointment of a caretaker PM, said: “I told you, people, last evening to not worry. The opposition is still confused as to what has happened to them.”

He reiterated that foreign interference had been made into the internal politics of Pakistan as the plan for a no-confidence motion was orchestrated outside.

He said in the National Security Committee’s meeting, the country’s highest security body, it was also noted that the foreign interference was made into the internal politics of the country through a no-confidence motion.

He said the minutes of the communique regarding a meeting between the ambassador of Pakistan in the United States and the US officials were shared in the NSC’s meeting.

The prime minister said the plan was perpetrated outside Pakistan to interfere into internal politics of the country, adding when the highest national security body confirmed it, it became irrelevant as to how many numbers the opposition had in the assembly. The embassy officials of the said country were also in contact with the PTI members who had defected, he said. The prime minister referring to his announcement early in the day, said the opposition was in a state of shock and they did not know what had happened to them.

PM Imran Khan continued: “Last night, you all were trying not to panic. The opposition is clueless about the situation right now. If I had disclosed what I was about to do yesterday, they wouldn’t have been shocked.”

Referring to the turncoats, the premier said that they used to hold meetings with the ambassadors of other countries on a regular basis. “What was their business talking to foreign diplomats?” the premier questioned. “The no-confidence motion was a foreign conspiracy. It was all connected.”

“I remind you all, ghabrananahihai (do not panic)”, the PM said. Meanwhile, Prime Minister Imran Khan has said that he was “astonished” by the reaction of joint opposition including Pakistan Democratic Movement (PDM) leadership over his decision to call early elections.

“Astonished by reaction of PDM to our calling for general elections. They have been crying hoarse about how our govt has failed &amp; lost support of the people,” he wrote on his official Twitter handle.