HAMILTON: Tom Latham cracked a career-best 140 not out, producing a batting masterclass in a near single-handed effort to take his side to 264 — and eventually a comfortable win against Netherlands in the second one-day international — after they were 32 for 5 at one stage here on Saturday. New Zealand collapsed from 22 without loss to lose 5 for 10 inside six overs, as Netherlands sniffed a miracle only for the opposition captain to spoil their party. On a day when his team-mates should have rather given him a gift, it was instead birthday boy Latham himself who was forced to do some favour to them. But his bowlers, led by allrounder Michael Bracewell, ensured that the total was safely defended, with all six of them taking at least a wicket each.

Netherlands’ reply started with both openers gone inside the first two overs itself, after which Vikramjit Singh and Bas de Leede steadied the ship. The 77-run stand that followed looked like the only while during which the visitors were in the chase, as the pair kept finding the fence with repeated boundaries. Vikramjit hit seven in his knock of 31, displaying an array of shots in the process: from the punch to the pull, from the slice to the slash. But once he deposited a Colin de Grandhomme full toss — a slower delivery bowled at 98kph — to long-on, the wheels soon started to come off for Netherlands.

What was 81 for 2 at one stage became 146 all out, with Michael Bracewell grabbing three of the wickets to fall, two of those with an offspinner’s dream deliveries. He looped one up wide outside off to lure Pieter Seelaar to drive, as the Netherlands captain got forward only to see the ball turn back in sharply to hit off stump. Michael Bracewell continued dealing with flight, dip and turn when he had Michael Rippon stumped off an identical delivery, with Latham behind having all the time in the world to whip the bails off. 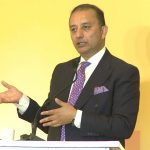