‘Yaariyan’ — a See Prime short-film full of friendships and frolic 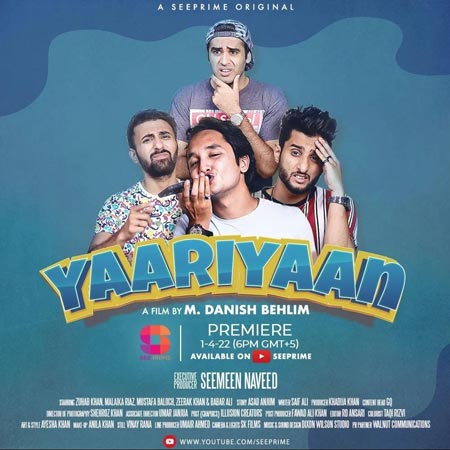 See Prime strikes again with yet another short-film in the making. ‘Yaariyan,’ a film by Danish Behlm and executively produced by Seemen Naveed is all set to be released. ‘Yaariyan’ starring Zuhab Khan, Malaika Riaz, Mustafa Baloch, Zeerak Khan and Babar Ali all play as best friends up to some mischief.

When four best friends are out at a dhaba, one of them decides to leave before paying the bill and excuses himself saying he has some important work.

This is when the other three cook up a plan and decide on a way where the friend can pay back for not paying the bill. So the three best friends now decide to meet up all over again along with Aliyaan. And right when his phone beeps and a message arrives the boys ask him whose message that was? And clearly it turned out to be a girl wearing a Niqaab who he had to meet up for lunch at a fancy place.

Now this is where the plan starts getting into action. Right when he goes to meet the girl we all know who must have been behind the Niqab! The three friends succeeded in tricking their friend and making him pay for that day!

A story filled with laughter and pranks. A story that will uplift our moods and lighten the vibe.

SeePrime is a digital entertainment platform bringing new, dynamic, breakthrough, original and distinctive content for its viewers. It has successfully broken into a dimension of untold and unique narratives for its audiences, exploring different and diversified genres.