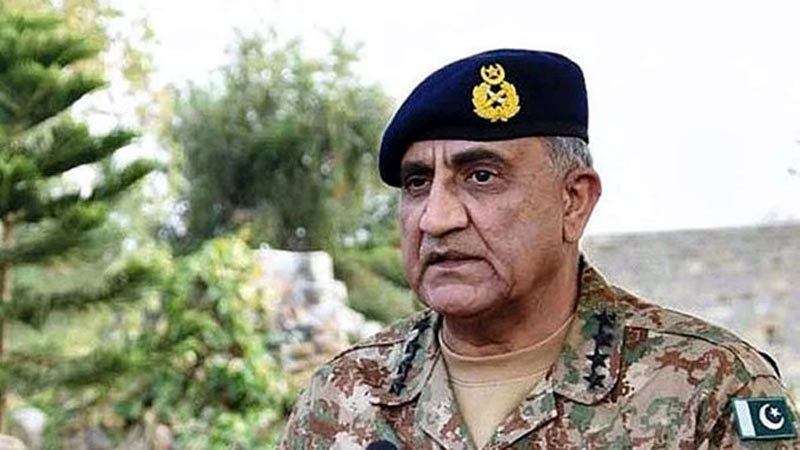 Chief of Army Staff (COAS) Gen Qamar Bajwa on Saturday said that Russia’s invasion of Ukraine must be “stopped immediately”, terming it a great tragedy. The army chief delivered his opening remarks at the second day of the Islamabad Security Dialogue 2022 as chief guest.

General Bajwa said regional security and stability was the component of the country’s National Security Policy, adding, “Citizen’s security and prosperity is our priority”. The Army Chief said, “Pakistan do not believe in camp politics and cannot promote its relationship with its partners at the cost of others. “We want to expand our ties with China, US, and Russia without damaging it’s national interests where Ukraine, Japan, Gulf States and other partners are equally important for the country’s development and economic prosperity”, the COAS said. While commenting on Pak-Russia crisis, he said Pakistan had serious concerns over Ukraine crisis. The unfortunate Russian invasion destroyed half of the Ukraine and killed many people, where both the countries should let the situation under their control to resolve the conflict, he added. He underlined that the expansion of the Ukraine crisis would not serve any country and Pakistan was demanding ceasefire between Ukraine and Russian.

The army chief mentioned that the world was facing challenges of poverty, climate change, cyber intrusion and others, whereas Pakistan was a country located at the cross roads of global economic and political transitions. Commenting on the country’s landmark National Security Policy formulation, the COAS said the first ever National Security Policy placed citizen security at its heart, where achieving this required peace at home and abroad. “Our commitment to defeat terrorism remains unwavering. The country sacrificed 90,000 lives in its war against terrorism and the Armed forces with national support achieved unprecedented accomplishments”, General Bajwa said.

“Pakistan already hosts four million registered and non-registered refugees and the world must stop Afghanistan becoming the new epicenter of terrorism”, he added. He urged the global community that the world must not disrupt it’s ties with Afghanistan and should not ignore Afghanistan amid Ukraine crisis. Commenting on the external security situation of the country, he said the situation along the line of control (LoC) remained peaceful and was satisfactory. He further mentioned that the Indian cruise missile launched into Pakistan was a major concern as India did not make any communication prior to its launch. “It has raised concerns over Indian ability to handle high end weapons. Pakistan has called for a complete probe into the situation. India must hold investigation of the failed supersonic cruise missile launch and ensure that its weapons are safe”, he demanded.

He said Pakistan had played the role of a responsible state among the comity of nations and released the Indian pilot captured after shooting down his aircraft intruding the Pakistan airpsace in 2019 while honoring the international laws and norms. “Pakistan again played a responsible state’s role on the occasion of the failed supersonic projectile launch into Pakistan that jeopardised many civilian lives”, he said. The Army Chief concluded that it was time for political leadership of the region to come up beyond their biases and emotional prejudices to resolve the issues including water crisis through dialogue.