Naimal is a vision in glittery scarlet sari 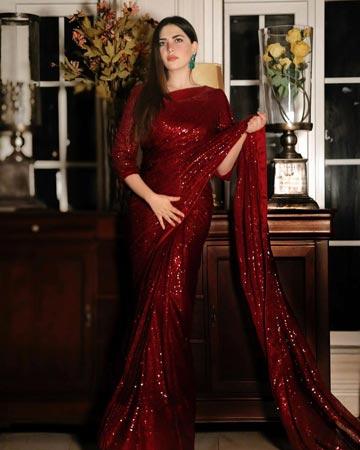 The gorgeous former actress Naimal Khawar Abbasi is a true fashion inspiration for all the girls out there. Her every look makes it to the social media fashion list. Even in her minimalist attires, she exudes timeless charm. The diva once again gave us major style goals in a dazzling scarlet sari by Mohsin Naveed Ranjha and we are swooning over her effortless grace.

Naimal Khawar is a former Pakistani actress, visual artist, painter, and social activist. She came into the spotlight with her role in the film Verna as Mahgul. She made a debut in the television industry with her drama Anaa and gained all the praise from her fans.

Later in 2019, she tied a knot with charming former actor Hamza Ali Abbasi in an intimate ceremony. The fashionista said goodbye to the showbiz industry after her marriage to pursue her career as a professional painter. The couple has an adorable baby boy, Muhammad Mustafa Ali Abbasi together.

Even though we don’t see her on our television screens anymore but she has a knack to stay in the headlines with her amazing fashion sense. Her on-point styling sense in both eastern and western gained a lot of traction from her fans and followers. And once again she left the tongues wagging with her killer looks in recent clicks.