* PM says he was told to face no-trust vote in parliament, hold fresh elections or step down 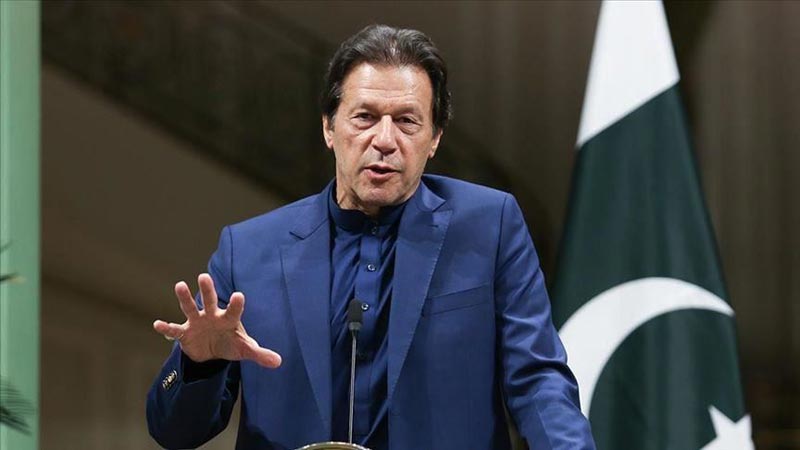 Prime Minister Imran Khan has said that Pakistan’s ‘establishment’ gave him three options to end the ongoing political turmoil in the country; face no-trust vote in parliament, hold fresh elections or step down.

This he revealed in an interview with a local TV channel on Friday. “I said early election is the best option I could never think of resigning and for no-trust motion I believe that I will fight till the last minute,” the premier remarked.

He said in the era of social media, the people particularly the youth would never forgive those shifting their loyalties for money and that they would be stamped forever. The prime minister said he would go to the masses and seek a heavy majority to cleanse all the filth. A government lacking a heavy majority had to make compromises.

He said his government had faced immense difficulties during the last three and a half years for not having a heavy majority. Imran Khan said his life was at risk because the adversaries knew that he would never stay silent. “They will implicate me in cases. They will launch a character assassination campaign. They already ran a campaign against my wife and her friend,” he remarked.

Referring to the conspiracy for his ouster, the prime minister said the developing countries were controlled by the abettors calling them Mir Jafar and Mir Sadiq of the present day.

In such a case, the foreign powers did not need to conquer a country rather they achieved their objective by planting the people who compromise the national interests, he added.

The prime minister said he had been in the know of the conspiracy since August and had also warned his cabinet of a tough winter ahead.

To a question, he said Nawaz Sharif had been meeting people like Hussain Haqqani, who had asked the United States to protect Asif Zardari against the Pakistan Army. Haqqani also met Nawaz Sharif on March 3, four days before the government received the communication calling for his ouster, he added.

The prime minister said a strong army was inevitable for the country and exemplified Iraq, Syria, Somalia and Libya were destroyed by the foreign forces as they lacked a strong army. Even Pakistan would also have been disintegrated into three pieces if it did not have a strong army.

Imran Khan said no individual inflicted the loss to the country more than Nawaz Sharif as he was the mastermind of Yellow Journalism, Changa Manga politics and even buying the judges.

He said both Nawaz Sharif and Asif Zardari made corruption an acceptable evil in the society as no civilized society could imagine the trade of loyalties as had been done at the Sindh House.

He said after getting the first NRO (National Reconciliation Ordinance) from Pervez Musharraf, the opposition was yearning for the second NRO to regain power and abolish the National Accountability Bureau to do away with their corruption cases and pave way for revoking the disqualification of Nawaz Sharif.

“They are trying to reinstate themselves by destroying the institutions,” he remarked.

The prime minister said the foreign powers were using the “thieves” to control the country, who could not speak up to conceal their riches abroad.

He said the corrupt leaders insulted Pakistan and put Pakistan’s Ideology on the back burner as they compromised the foreign policy just for the sake of aid to become billionaires.

He said the people of tribal areas as well as the expatriates suffered a lot after Pakistan joined the US-led war against terrorism just for the sake of aid and appeasing the superpower.

Reiterating his government’s policy of having cordial relations with all the states, he said Pakistan would become a partner in peace but not conflict.

He said after losing 80,000 lives, Pakistan achieved nothing from the US-led anti-terror war except the elite which got benefits.

He said contrary to the practice of joining one bloc after the other, his government’s foreign policy was aimed at keeping the people’s interest supreme.

He said Nawaz Sharif and Maulana Fazlur Rehman’s party had supported the conspiracy against Zulfikar Ali Bhutto, who was also targeted for towing an independent foreign policy.

Referring to the conspiring communication, the prime minister said it only mentioned the ouster of Imran Khan. It said in case of his ouster, Pakistan’s all misgivings would be forgiven else the country would face difficulties.

“This means there is a connection with them. Why the US Embassy people are meeting them… I have all the reports who met whom and which politicians, anchors and journalists went to the US Embassy,” he added. He said the conspiracy was meant to isolate Imran Khan. “Such threatening communication in black and white is unprecedented. What could be a bigger threat to a nation than the regime change. I feel frightened as how we reached that stage that they dared to threaten us this way,” he remarked.

He said in order to target someone, they collaborate with and fund the media for character assassination. Three months ago, a TV anchor told him that news channels were being offered money to target the government.

“Why Imran Khan turned into a villain all of a sudden. This did not happen for no reason. It involves money,” he commented.