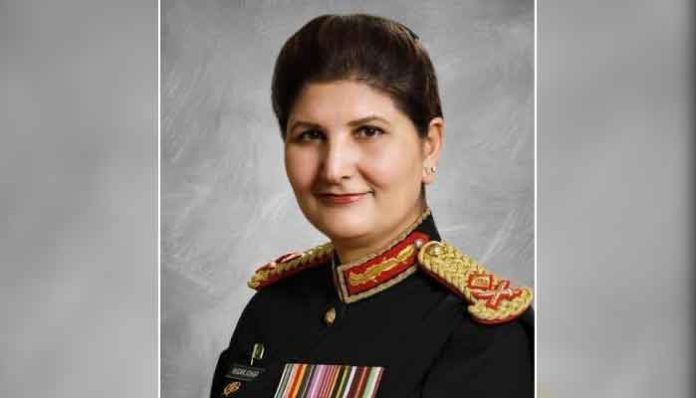 NEW YORK: Pakistan’s Surgeon General, Lieutenant General Nigar Johar, was hailed as a ‘role model’ for her services at the 4-day spring meeting of the Association of Physicians of Pakistani Descent of North America (APPNA), which ended in Oklahoma City on Sunday.

Gen. Nigar Johar, who is also the Director-General of the Medical Services (Inter-Services) of Pakistan Army, participated in a range of meetings at the invitation of APPNA for its social forum on women empowerment. She is the first female officer to promote to 3-star general.

Her packed programme (from March 24 to 27) included speaking engagements, public awareness walk, focused meetings and plenary sessions as well as the closing gala.

On an opening day, the Surgeon General spoke on ‘Women empowerment’ as keynote speaker at the Social Forum, which was attended by key members of the Pakistani-American community, the message said.

She gave a presentation followed by a 2-hour question-answer session with the audience during which she shared the stage with former senior US diplomat of Pakistani descent, Dr Shirin Tahir-Kheli. The Surgeon General was also invited by APPNA’s board members during its council meeting.

She discussed the following agenda items:

— Placements of personnel of Pakistan Army Medical Corps in US for advanced training in select specialities as fully paid, partially paid or sponsored.

— Collaboration between senior and highly skilled doctors in US and Pakistan Army for seminars, workshops, talks etc in Pakistan at Training institutes of Army Medical Corps as Proctorship Programmes

— Discussion regarding personnel of Army Medical Corps being invited or offered courses of short duration in the U.S.

On 26 March, the Surgeon General was the Guest of Honour at the APPNA’s closing ceremony where she exchanged pleasantries with Oklahoma Governor Kevin Stitt as well as Leslie Vaguerie, with Deputy Assistant Secretary of State for Central Asia and Pakistan. Ms. Vaguerie was here for a discussion at APPNA’s advocacy forum, with Consul General Abrar Hashmi joining from the Pakistan side.

The visit offered a unique opportunity both for professional engagements and also for advancing the soft image of Pakistan, the message said.

A centre of attention at APPNA’s spring meeting, the Surgeon General helped showcase women’s progress, and enthused confidence among many young men and women to join the profession and Pakistan Army, it said.

She was also hailed as the image of meritocracy and high human standards within the Pakistani institutions. Her visit and interactions with the doctors in US may lead to future collaborations in the field of medicine and exchange of doctors, it was pointed out.