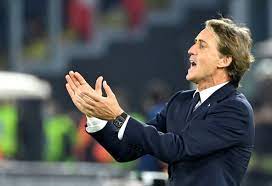 Milan: Italy are aiming for World Cup glory despite having to navigate a treacherous play-off path in order to get to the 2022 tournament, with North Macedonia the first barrier standing in their way.

The European champions begin a potential two-match mini campaign in Palermo on Thursday with missing a second straight World Cup a real possibility, as a trip to either Turkey or Portugal awaits should they get through their semi-final.

However coach Roberto Mancini says he is looking past the playoffs and at Qatar, where the tournament kicks off in November.

After so-called ‘Notte Magiche’ (‘Magical Nights’) of Euro 2020, Italy looked certain to banish the ghosts of the disastrous qualifying campaign for 2018 as Mancini’s team not only won, but won playing an expansive style of football rarely associated with the Azzurri.

Those balmy summer evenings soon gave way to a frosty autumn in which Italy drew four of their final five World Cup qualifiers and two missed Jorginho penalties in their two matches with Switzerland cost them an automatic spot.

Italy’s displays in those matches did not live up to the swaggering style which characterised their play right up to their Euro quarter-final win over Belgium.

“I’m confident. I have good players, professionals who from nothing built a victory that nobody believed in beforehand,” added Mancini.

“They managed to form themselves into an extraordinary team. We need to build our confidence from that, from what we have accomplished.”

Although the manner in which top spot in Group C was handed to the Swiss has caused alarm, Mancini is sticking with the blueprint which brought him triumph at Wembley.

“We don’t have much time to try out new things in training. The basis will be the same as in the Euro,” he said.

Italy will likely be missing their entire first-choice back four, with Giorgio Chiellini, Leonardo Bonucci, Leonardo Spinazzola and Giovanni Di Lorenzo all expected to be out of the semi.

Right-back Di Lorenzo was taken out of the picture at the last moment when he limped out of Napoli’s 2-1 win over Udinese on Saturday afternoon, while on the other flank Spinazzola hasn’t played since injuring his Achilles tendon against Belgium in July.

The last time Bonucci played was early March while on Sunday Juve teammate Chiellini made his first appearance for the best part of two months, in the first half of his team’s 2-0 win over Salernitana.

Mancini said he probably would not risk a figure as important as Chiellini for a home match against a team they would expect to dominate, given the tough nature of the final should they get through.

“Giorgio is pretty good, we’ll see if he can play both matches, probably not, but we’ll talk about it together,” said Mancini.

Backing his team will be a sell-out crowd at the Stadio Renzo Barbera in the Sicilian capital, the first match in Italy to be played in front of a full-capacity stadium since the coronavirus pandemic first curbed attendances.

Stadiums in Italy are not due to fully open until April after fluctuating between 50 and 75 percent since the start of the season but special permission has been granted for the play-off as Italy hope to not repeat the nightmare of just over four years ago.